Lionsgate’s “Saban’s Power Rangers” is an ambitious reboot of a ’90s phenomenon — as one studio exec puts it, “going from spandex to titanium” — at a time when long-awaited sequels have been hit-or-miss.

But to bring in everyone from millennials who grew up catching “Mighty Morphin Power Rangers” on Fox to young fans currently watching the 24th season of the show, “Power Rangers Ninja Steel” on Nickelodeon, the studio is rolling out a digital-heavy marketing plan that includes everything from virtual reality to “fake news” to YouTube influencers.

“Power Rangers,” which stars Elizabeth Banks and Bryan Cranston and was directed by Dean Israelite, hits theaters on March 24. Billionaire “Power Rangers” creator Haim Saban, who bought back ownership of the franchise he developed from Disney in 2010, is producing the film through his Saban Brands.

Also Read: You Can Watch All 831 Episodes of 'Power Rangers' on Twitch Right Now

“Power Rangers” aired for 24 different series with 20 distinct themes, and there were also two feature films. The first series, which put the Japanese-adapted live-action superhero show on the map, was “Mighty Morphin Power Rangers,” which debuted in 1993 — and spawned millions of rabid fans who still embrace the brand’s core identity.

“We really wanted to do no harm in terms of the great property that Haim and the Saban team created and protected and nurtured every day,” Tim Palen, Lionsgate’s president of worldwide marketing, told TheWrap. “At the same time we needed to blow the world up and make it more inviting for everyone who was a lapsed fan or aged out of it.”

“From day one, Lionsgate and Dean Israelite, the director, really got it — “Power Rangers” and its DNA — and they have been great partners,” Saban told TheWrap in an email. “So in developing this together, we knew we could deliver a film that is current and accessible to a four-quadrant audience while preserving the elements of the brand DNA that our fans know and love.”

Part of reimagining that universe was an emphasis on digital, virtual world-building campaigns that intended to meet “Power Rangers'” younger fans in their natural habitat: online. Lionsgate also developed partnerships that aligned with two overlying themes fans old and young related with “Power Rangers,” according to some online research done by the studio. Those were: team building, branded as “Together We Are More,” and the Rangers’ bright and distinctive hues, given the slogan “Our World Is Better and Brighter With All the Colors.”

“We were impressed with the strategic and respectful way the Lionsgate marketing team stayed true to the franchise while also focusing on building excitement for the film,” Saban said. “We both felt that activating a strategic digital campaign was important to building engagement and driving box office, and we looked to extend beyond traditional advertising tactics to drive digital engagement.”

One creative — and timely — part of Lionsgate’s world-building effort was its creation of a fictional online school newspaper for the fictional town of Angel Grove, California, where “Power Rangers” is set. They produced four different “issues” that followed the narrative of the released trailers, and provided more information only found online. The newspaper also reported on a new Krispy Kreme in Angel Grove — one of the film’s advertising partners.

And for the first “Together We Are More” overlay, Lionsgate had the “Power Rangers” cast join forces with sports entertainment troupe Dude Perfect — whose YouTube channel boasts 16.3 million subscribers — as they faced off in an Epic Relay Challenge. 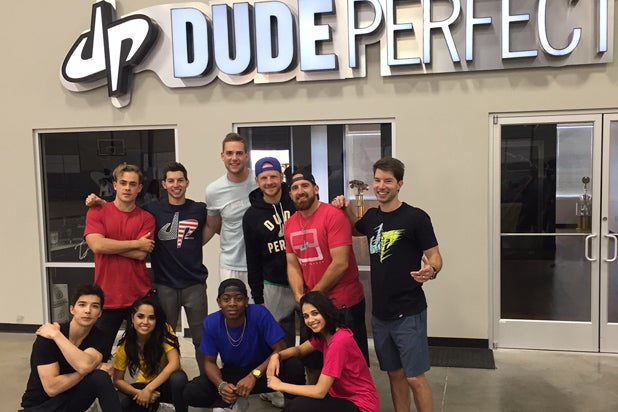 “We wanted to work with the best content creators to help endorse the film,” DePalma said. “It was kind of serendipitous, one of the most popular on YouTube was a group of five guys who do extraordinary sports tricks.”

Also Read: 'Power Rangers:' What We Know So Far (Photos)

Lionsgate highlighted that magic number five — matching up with the five rangers — in some of its other marketing efforts, which included a Morphin Mondays promotion with Atom Tickets where fans can get $5 tickets for sharing insights with five friends.

And that theme carried forward to Lionsgate’s “color” overlay, as the studio teamed up with color-authority Pantone to select five official “Power Rangers” colors, based on color psychology traits that match the rangers’ personalities. That’s accompanied by an interactive quiz to help fans figure out their color, with results that include shareable illustrations.

Maybe most exciting – and meaningful – is a partnership with Enchroma to raise awareness of color blindness. Enchroma makes glasses that allow color blind people to “see color,” and the movie is inviting people to apply for a free pair of that custom eyewear on Enchroma’s website.

And naturally, because it’s 2017, there was a virtual reality component, too. Lionsgate developed a “Zords Rising” VR experience with Qualcomm and ReelFX that debuted at the Consumer Electronics Show in Las Vegas in January — and had a long line of eager fans waiting to try. After strapping on the smartphone-based headset, users were transported behind the controls of a Zord — a giant walking robot piloted by the rangers.

“We were able to bring people into an immersive real world,” De Palma said. “We had voiceover from the cast within it. Fans were able to go in there and pilot the Zords.”

Palen, who said he can’t remember working on another film with a 25-year fanbase, said it was important both for people who have aged out of the younger-skewing TV show and rabid fans of it to feel “invited to the party” when the film comes out. And there’s really only one way to get a hold of people under 40 nowadays: social media.

“After 25 years, there’s still so much goodwill and love,” Palen said. “And technology comes in extra special for something like this — it allows us to touch people that are fully aware in a different way.”

Saban said it’s still surprising to see first-hand just how much love people have for “Power Rangers” — which was why bringing the brand into 2017 was such a serious undertaking.

“With Lionsgate, we were really thoughtful about every detail in this film,” he said. “We knew the fans would be watching closely.”

“The Power Rangers are giant stars in pop culture vernacular,” Palen added. “Being trusted with this next step in the brand’s evolution is an honor and a privilege that everyone at Lionsgate is grateful for — and one that we all take very seriously.”

'Power Rangers:' What We Know So Far (Photos)

”Power Rangers“ will be released in the United States on March 24, 2017

Saban’s "Power Rangers" follows five ordinary high school kids who must become something extraordinary when they learn that their small town of Angel Grove – and the world – is on the verge of being obliterated by an alien threat. Here is what we know so far: