says the technical issues plaguing his pre-paid debit RushCard are over. But the hip-hop mogul’s problems are just beginning.

“He should be very worried right now,” Joe Valenti, director of consumer finance at the Center for American Progress, told TheWrap. “Reputation is a hard thing to build, but easy to lose.”

Another expert said that Simmons had done a grave disservice to the African-American community who he was purporting to help.

“ has lied to the African-American community for years telling people that RushCard helps you build credit,” Ryan Mack, financial expert and contributor to Financial Juneteenth, a site dedicated to empowering the black community, told TheWrap. “This is a business of greed and exploitation of ignorance.”

Simmons continued his damage control blitz across social media this week, telling cardholders that the RushCard fiasco is fixed.

“We can announce today that all major functionality, including 2 day advance direct deposits and card-to-card transfers, is restored,” Simmons posted on Twitter, Instagram and the RushCard Facebook page Monday. Although he admitted people may have to wait until Oct. 30, to access government benefits directly deposited into their RushCard accounts, including Social Security and veterans benefit payments.

According to a class action lawsuit filed Friday in U.S. District Court in New York, RushCards are mostly used by “poor and working class Americans” who don’t have traditional bank accounts. Judging by the user profiles of angry customers posting comments on the RushCard Facebook page, many of those cardholders are African-American. 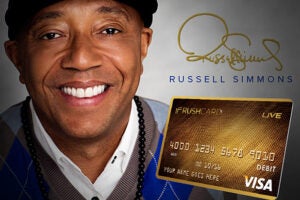 Valenti says the cards are “predatory.”

“This is a card with predatory practices like charging people every time they swipe,” Valenti explained. “Like other celebrity cards, this card has earned a shady reputation.”

Simmons and RushCard did not respond to TheWrap’s requests for comment.

Adding to Simmons’ problems, federal authorities are now looking into the RushCard meltdown.

“The CFPB is taking direct action to get to the bottom of this situation that may have harmed thousands of innocent consumers already,” Consumer Financial Protection Bureau Director Richard Cordray said in a statement on Friday.

In the last decade, prepaid credit cards have grown into a lucrative business, with retail purchases made on the cards topping $200 billion dollars last year, about 5 percent of all retail spending in the U.S.

Others celebrities have dabbled in the prepaid card business, including reality star Kim Kardashian, who terminated her relationship with the company issuing her card after the Connecticut Attorney General wrote a letter questioning the legality of the card’s “pernicious and predatory fees.”

But critics argue Simmons’ fees are some of the most egregious.

“RushCard was one of the worst ones,” said Valenti. “The only reason people bought them was because it was associated with Simmons.”

Founded by Simmons in 2003, the RushCard can be used to make payments and withdraw cash at ATM machines without being linked to a traditional bank account. Simmons has touted his product as a lifeline for the disadvantaged who are often unable to open a regular account because of poor credit or financial hardship.

The class action lawsuit quotes him as saying, “A decade ago, I watched poor and working-class families standing in long lines outside check-cashing stores, waiting for the privilege of paying to cash their paychecks. I thought there had to be a better way.”

But financial experts tell TheWrap that the only people who benefit from these cards are Simmons and his business partners, with customers paying up to a dollar a swipe and anywhere from 50 cents to $1 just for a balance inquiry.

“For a typical worker without a banking account, we’re talking at minimum a few hundred bucks a year [in fees],” Valenti explained. “There are lots of cases where that can be in the thousands.”

Simmons, who is reportedly worth more than $325 million, has been on the receiving end of angry comments on the RushCard Facebook page after customers were unable to use their cards.

“I’m done with Rushcard,” said one exasperated user. “I have been a customer for over 10 years this just took the cake yes I’m furious!!!‬”

Another person posted: “Good god! So here we sit cold, hungry, money less, hopeless, and feeling worthless because bills are going unpaid, babies without food and diapers, people without medication! You sit there in a mansion bought with our money and have the nerve to tell us we need to do all these steps to find out if we have our hard earned money yet.”

The RushCard debacle started after the company switched from one processing provider to another over the Columbus Day weekend. Customers reported their cards were declined. In some cases, money went missing from accounts.

Since Oct. 12, Simmons has issued numerous apologies and even phoned and direct-messaged affected users on Twitter.

“Still personally calling lots of people this morning. Fixing the remaining problems People have been so nice despite week of hardships,” he tweeted on Oct. 19.

But according to Valenti, Simmons’ personal calls may not be enough.

“If any bank did what did there would be hell to pay,” he said.