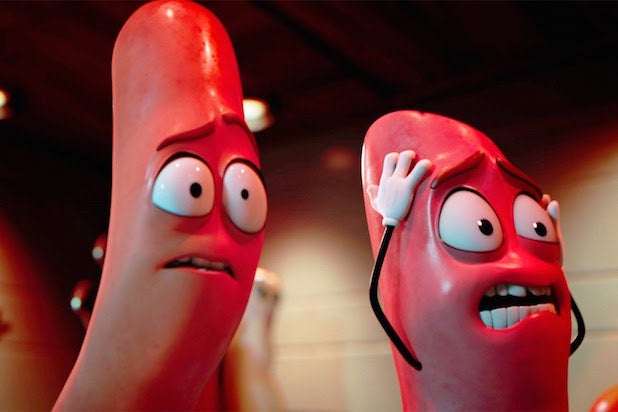 Just days after a Christmas party at Nitrogen Studios in Vancouver, roughly 30 members of the company’s animation department sent a letter to management. But it wasn’t to say “Season’s Greetings.”

Instead, they laid out complaints of long unpaid hours, threats, and “unfair pressure tactics” used on the $19 million Seth Rogen comedy, which earned a record $33.6 million in its opening weekend.

“Unfair pressure tactics are being used against the team: intimidating staff into working past official studio hours, disciplinary measures utilizing fear tactics that demotivate and cause distress (such as threatening to terminate employment), implying that other departments are working overtime ‘voluntarily’ as a reason to deny compensation,” the letter said. “These issues are breaking people’s ability to focus on animation and are making for an unrewarding and frustrating work environment.”

The labor complaints and the letter — which also complained of “a deterioration of morale and motivation” — might never have come to light if not for an interview given last week by the film’s directors, Greg Tiernan and Connor Vernon.

“It doesn’t have to cost that much money when you’re well organized, and you have your mind set on the goal of what you want to do, and you get the job done with a small, determined crew,” Tiernan told Cartoon Brew last Friday. “We knew damn well that we could deliver a movie that looks like a $150 million movie for a fraction of the cost.”

In response, animators flooded the comments section of the interview. Later, animators spoke out in the media. TheWrap obtained the final draft of the holiday letter, which was signed by about two-thirds of the then-45-person animation team.

One animator told TheWrap that Vernon, Seth Rogen, and Evan Goldberg — everyone who was not affiliated with Nitrogen — were not involved and were likely not even aware of the treatment. (The animators interviewed for this story requested anonymity out of concern for their careers.)

“It’s something that was just inside the studio,” the animator said. “I’m pretty sure that the clients, meaning Annapurna and Point Grey and Sony, had no idea what was going on inside the studio.”

In a statement sent to TheWrap, Nitrogen Studios president and CEO Nicole Stinn disputed the claims.

“The allegations are completely unfounded and the claims are without merit,” she said. “Our production adhered to all overtime laws and regulations, as well as our contractual obligations with our artists.”

Sony, which is the distributor for “Sausage Party” but was not involved in its production, declined to comment. So did Annapurna, which co-financed the film.

Out of the 118 members of the animation department listed on IMDb, at least 36 were uncredited on-screen.

Animators said that because “Sausage Party” was the first feature animated film for Nitrogen, which mostly had been doing kids’ TV shows, it became clear that the studio wasn’t on track to finish the movie by an April deadline without rapidly increasing its output. As a result, the animators said, they were required to work overtime without additional pay out of fear that they would lose their jobs.

Two animators said Nitrogen began expecting them to double their weekly quotas with no sacrifice in quality — months before the typical “crunch time” for a feature occurs.

“If I had to do five to seven seconds [of animation] a week, now I have to do eight to 10 seconds a week, which is more work for me and less time,” said the first animator.

“There was no way of hitting the quota that they require of you without staying overtime, and if you didn’t hit your quota, you would get summoned into the office,” the second animator said.

The second animator said studio management never threatened to fire anybody for not working overtime — but said managers strongly suggested that their contracts and even careers might be at risk.

“You’re being called into a room and they tell you, ‘Okay, don’t worry, you’re not being fired, but you need to get your quota straight by the end of the week or we don’t know if we can continue with your contract,'” the animator said. “It’s really uncommon for people to get summoned into an office and being threatened that they could never find work in this town again.”

Eventually, the situation escalated to the point where the majority of the animation department came together to draft the post-holiday party letter.

Nitrogen management offered signatories the chance to retract their support for the letter, according to two animators interviewed by TheWrap. But the animators said that when Annapurna caught wind of it, some things improved — including the addition of overtime pay and catered meals for employees working after 6 p.m.

“Since then, things were okay, but we needed to act in order for that to happen,” said the second animator, who had been working on “Sausage Party” since August 2015.

But animators said things didn’t improve for their less-experienced colleagues. Nitrogen recruited a crew of junior animators — many of whom were new graduates from the Vancouver Institute of Media Arts. One of them told TheWrap about frequent expectations of working weekends to finish shots, sometimes with little notice — under the threat of losing them.

“This is my first shot and I’m thinking, ‘Hey, that’s my shot. Don’t hand it over to someone else. I worked on that for about a week,'” the junior animator said.

The junior animator described often working past 9 p.m., and said one animator even slept overnight in the office. Though many junior animators were clocking in workdays well past 12 hours, overtime pay was not provided, animators said.

“The only thing they told us was that we’d have to be regulars to be qualified for overtime pay, and since I just recently came into production and was barely three months in, I wasn’t qualified,” the junior animator said.

Animators who worked on the film said that studio management — particularly Tiernan, the executive producer of Nitrogen Studios — fostered an “atmosphere of fear” for employees by threatening to blacklist animators and publicly humiliating those whose work didn’t match Tiernan’s expectations.

Even near the final days of production, concerns about retribution lingered.

“There was a surprising amount of fear from people in the studio of not getting credited, even among the lunchroom,” the junior animator said.

One animator reported working on the film for a year, fulfilling the contract with the studio, and still being left off the credits. Following the film’s premiere, the animator described reaching out to Rogen to alert him about the number of animators not receiving credit. (The animator had not heard back as of this writing.)

Though animators acknowledged that the studio was not contractually obligated to include their names, they said studios rarely withhold them from the on-screen credits.

“This is important for us to get future work, you know? This is how we get our next job,” one animator, who did receive on-screen credit, said. “So if you’re not on the credits, other than the fact that it’s just humiliating, it can be a little bit harmful.”

Read the final draft of the animators’ letter to Nitrogen below.

This letter is in regards to recent changes that were made to the animation department’s production schedule and the state in which work is being delivered into the department. As a result of these changes, the department is now facing a disconnect between the scheduled time given to complete tasks versus the actual time required to do so at the expected quality. Because of these issues, the department must therefore compensate for this disconnect by working much more than the standard eight hour work day, attempting to follow a schedule that does not promote efficiency on work that is often poorly prepared and arbitrarily distributed. A deterioration of morale and motivation has set in due to these issues and this situation requires your attention so that a proactive solution can be found.

The animation department scheduling has now been significantly sped up, yet the incoming work is being distributed in an stunted and fragmented manner that counteracts any means of establishing beneficial continuity, familiarity and narrative within a sequence that would actually allow for speedier and more efficient production. Work is being delivered into the department in a chaotic state that often requires an animator to troubleshoot problems with the shot before they can even proceed with animation. The volume of work arriving into the department is also lacking, and this is causing problems across the board as people are less able to work “in context.”

In an odd way, the animation department is basically being asked to work faster, but at the same time is being fed work in a way that is severely slowing it down. These conflicting factors are very contradictory and are sabotaging the departments efficiency. Additionally, unfair pressure tactics are being used against the team: intimidating staff into working past official studio hours, disciplinary measures utilizing fear tactics that demotivate and cause distress (such as threatening to terminate employment), implying that other departments are working overtime “voluntarily” as a reason to deny compensation. These issues are breaking people’s ability to focus on animation and are making for an unrewarding and frustrating work environment.

The state and volume of work coming into animation needs to improve so that the conditions that will allow for animators to work efficiently can be attained. If the time needed to fulfill the department’s current schedule goes beyond the standard work day then overtime needs to be compensated for accordingly. According to the B.C Ministry of Labour, daily overtime is paid at time-and-a half after an eight hour work day. If these issues are left continuing on as they have been, the only solution possible to meet the schedule would be to compromise the quality of both the animation and the work environment below the level that people agreed to when they signed on.

We are well aware of the challenges that this production faces at this time, but making up for these challenges is not a task that lies solely with the animation department. The team is very invested in the project, but without an adequate work environment, rest and compensation during the the next four months, the result will most likely be a high employee turnover rate. This is an issue that has occurred previously and it cannot be allowed to reoccur in this manner where it will ultimately slow down the production once again. Innovations as to how this department is managed are needed so that all team members can achieve their highest quality and efficiency levels possible. Once these innovations take hold all the efficiency and benefits the animation department can derive from them can be put towards making the best film possible in the time we are given. We sincerely hope that we can work with you to come up with a reasonable and proactive solution.