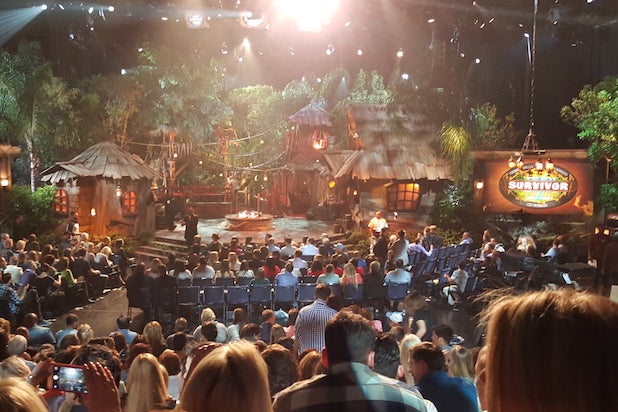 The finale of “Survivor: Worlds Apart” and live cast reveal of the upcoming “Survior Cambodia: Second Chances” aired as the lead in to David Letterman’s final show on Wednesday night. While CBS won the night with a 2.1/7 share in the key 18-49 demographic and scored a trending topic with “#SurvivorFinale” on Twitter, here is what those 9.41 million TV viewers did not see on TV.

TheWrap was behind the scenes of the live taping at CBS Studio Center. Here’s 11 Things Scene and Heard:

70-80 More Seats Needed
Due to high demand for this finale, 70–80 additional seats had been added to the studio audience over and above what CBS has done for the previous 28 finales.

Powers was not around to see the victors pose for this photo. Troyzan Robertson, a fellow near miss did stick around and was misty eyed. (Monty Brinton/CBS)

Shane Powers Slips Out
It is the consensus snub that Los Angeles media personality, Tyler the Creator protégé and scene veteran Shane Powers did not make the cut for the nationwide vote on to the fall season, “Survivor Second Chance.”

Unsurprisingly: Powers booked out of the studio side door during commercial break right after the reveal. There were handlers looking after the candidates and while others stayed in their seats, Powers was out the same side door that the Season 31 cast members would walk out minutes later to a “bus” taking them to Cambodia. He tweeted later in the night that he was “done” with the show after being in contention to return three times and told die-hard fans to “let it go” and “It’s OVER.”

Shirin Gets Hugs
The cast was brought out on stage multiple segments before they actually appeared on the telecast. After watching Shirin Oskooi’s rousing final tribal council speech on the playback monitors in studio, finalists Mike and Carolyn both got up from their “Final 3” perches to go over and hug Shirin on the stage while the playback rolled.

Who Gets Second Place? And How much?
Neither runner up — Carolyn or Will —  knew who would officially be awarded second or third place. They also did not know the financial breakdown of their prize money. They told me after the show they would find out after completing press for the show. It had been previously reported in past seasons that 2nd place got $100,000 and third place something substantially less. It remains unclear if they will split the second and third place prize money.

Jeff Probst Thanks the Families for Being “Decent”
“To the families, thank you for being decent during ‘that,'” Probst addressed the audience from the middle of the crowd during a late commercial break.

The “that” was the ugly, awkward and dramatic intervention he led to effort an apology out of Will Sims for his attack on Shirin Oskooi during the season. Will’s wife had tried shouting down Shirin from the audience during the live telecast, a moment producers had apparently prepared for as she was mic’d up and had a camera trained on her.

“Normally we have 8 or 9 minutes more (to talk to the cast”),” Probst told the audience, talk-show style. He referenced the unusual format in which the abbreviated reunion led in to the live reveal of the next season’s cast.

Probst Steps In To Ryan Seacrest‘s Dream-Dashing Shoes Uncomfortably
During the same extended commercial break, Probst also pivoted to address the studio audience and ask them to honor and respect the 32 candidates who had flown in from across the country to face the results of the nationwide vote on live TV. He seemed uncomfortable playing the role of his pal Ryan Seacrest, and dashing dreams live on air. He would conclude the night with a tweet again reiterating his respect for the people who love the game that has defined his career enough to take the risk. Remember, this is the same guy who had a syndicated Jeff Probst Talk Show.

Mark Burnett “Never” Checked the “Tens of Millions” of Votes
Probst announced on-air that there had been “tens of millions” of votes cast for the “Second Chance” season. Unlike other live competition show producers who monitor the viewer votes and can predict the outcome within hours of the east coast airing, Mark Burnett never looked at it during the two week campaign.

“The first time I saw any votes was tonight,” he told TheWrap backstage after the finale. “Also, I rarely even want to know who won (the normal seasons). Tonight, I did not know who won until tonight.”

He just had his own “The Voice” finale already this week never does press or makes public appearances at the “Survivor” finales. He did press because it was the 30th Anniversary season. He has been much more public this spring, attending a “Survivor” exhibit at the Paley Center back during Oscar week.

Payne jumped out of her seat (looks like that ankle is better) when Holloway won his first challenge on screen. Payne was seated in one of contestant Vince Sly’s family allocated seats and told TheWrap that daughter Baylor could not get a ticket, but was watching back at the Universal Sheraton.

Missy texted (in the overexaggerated huge font) that she already knew the final 3 minutes in to the show, causing those sitting around her to avert their eyes to avoid being spoiled.

On-screen, villain Dan Foley’s “eye rolls”  from the jury box also went over huge. As for anything other than a Holloway win, runner-up Carolyn Rivera’s come-from-behind victory over Rodney Lavoie in the prolonged fire making challenge at final four got the loudest pop of any non-Holloway moment.

Crowd Told Not to Boo
In a season marked by some ugly behavior, the audience warm-up guy had told the crowd not to boo anyone before the finale.

This appeared to be in anticipation of the unpleasant rehashes that were to come. I have been to about a half dozen live finales and never heard this instruction given before. Jeff Probst addressed the audience pre-telecast and correctly predicted that the reunion would be “interesting”.

Malcolm Freburg Hugs So Kim’s Family
Malcolm Freburg, the two time fan favorite player who is reportedly dating this season’s first boot So Kim, came over to greet Kim’s family in the second to last row just before the finale begin. After the show, with Parvati Shallow having flown the coop to NYC, Malcolm hosted CBS’s house red carpet coverage interviewing Burnett and getting a warm hug upon meeting Holloway for the first time.

Rodney’s Blue Suit
Birthday crybaby Rodney Lavoie, who was gifted a cake and the rare national broadcast of the expensive “Happy Birthday” song, showed up to the finally in a loud blue on blue suit. It seemed like something that his best bro Joaquin Souberbielle would have picked out for him. Surprisingly, he styled himself.

Lavoie told me he is off to Vegas for Memorial Day Weekend festivities with fellow Survivors. Note to the Vegas clubs: Cue up 50 Cent’s anthem, “In Da Club”.

You know the refrain — “Go shorty, it’s your birthday.”