Over 8.74 million fans watched the controversial season finale of “Survivor” on Wednesday night, propelling the 35th season of the veteran franchise to a runaway win in key ratings categories.

From the pre-show action on the CBS lot in the Fairfax neighborhood of Los Angeles to the post-show party, TheWrap was there soaking it all in — here’s what those millions of viewers didn’t see on TV. 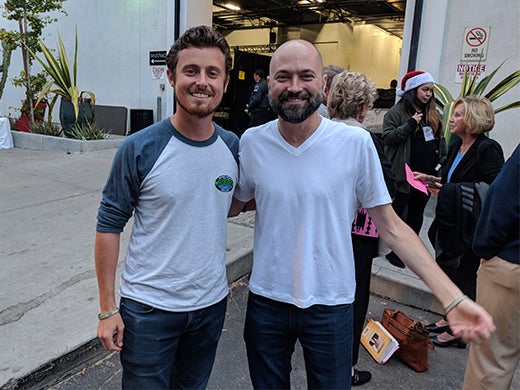 Klein and Wright outside the finale studio. (Mikey Glazer)

Klein, the homeless shelter manager who pulled off an emotional win a year ago hours before his mother died from cancer, was back on the lot. He was hanging with one of his rivals-turned-friends from the season, “Family Guy” writer David Wright. Both told The Party Report that this was the first time they were attending a live finale as fans, and seemed thrilled to have no pressure.

Also Read: 'Survivor' Finale Has Fans in a Tizzy After Twist: 'This Is Hillary vs Trump All Over Again' 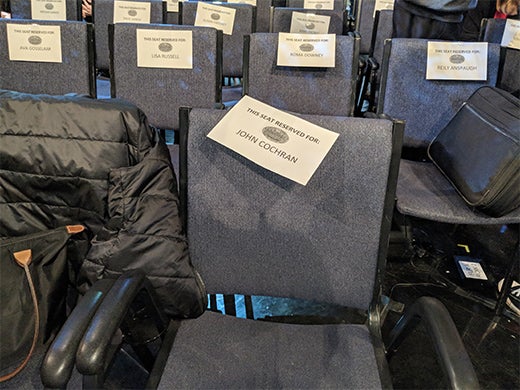 A reserved front row seat for the man known as “Cochran.” (Mikey Glazer)

John Cochran is a former winner who launched a TV writing career on a previous live finale show by pitching himself to a national audience.

Host/Executive Producer Jeff Probst loves him, inviting him back on the show as a “reward” and frequently involving him in reunion shows to the consternation of  the diehard fandom and many former players who sneer at his role as the teacher’s pet.

For now, he’s still got the Clooney seat at the Oscars: front row. 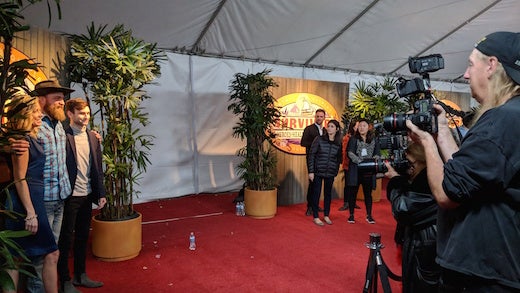 When winner Ben Driebergen (center) posed on the red carpet backstage after the show, the grizzled pool of Hollywood red carpet photographers accustomed to shooting starlets and professional media pros was impressed with his natural stage presence. “Have you done this before?” one asked.

“I’ve definitely never done this before,” the Boise, Idaho, native replied as he swallowed a chuckle.

Adam Scott and Nick Offerman had front row seats reserved for them in the key “house right” front section. Scott slipped out right before the end of the reunion, while neighbors Cochran and MGM CEO Gary Barber hung around until the end. “Survivor” creator/executive producer Mark Burnett sold his company to MGM before taking over their TV division. The Party Report spotted the two moguls chit-chatting in the studio just before the show went live at 5 p.m. local time.

5. Coming to you live, from the red carpet … 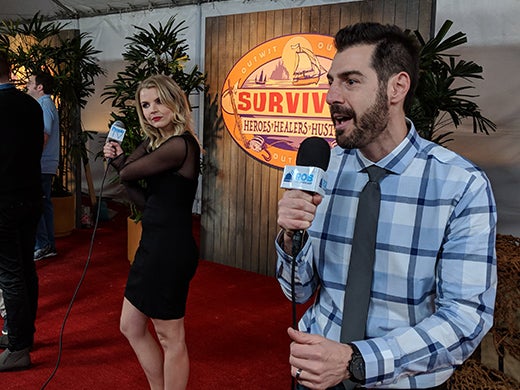 Two former multi-season “Survivor” contestants who have successfully made the leap to full-time media personalities were broadcasting live from the red carpet after the show. In the foreground, Rob Cesternino (owner/host of the “Rob Has a Podcast”, “Post Show Recaps” podcast and video networks) and Andrea Boehlke (anchor for People TV) had side-by-side carpet positions. The two are known to be friendly and guest on each other’s shows and networks.

Curiously, while former players Malcolm Freberg, Parvati Shallow and Joe Anglim have hosted CBS’ live feed in the past, there was someone new manning the microphone for the network’s own house crew.

Disclaimer: In my work as an attorney unrelated to this post for TheWrap, I work with the aforementioned Rob Cesternino. I am biased and so is his audience. We all think he’s great!

Throughout the season, Dr. Mike Zahalsky built a reputation for talking in clinical terms about his work as a “d—  doctor.” During the commercial break after he was eliminated from the show, he kept his comments in the pelvic zone.

He returned to the stage to address the house audience. He thanked his family for letting him go on “Survivor” and specifically called out his daughter for “putting up with me running around on TV in my underwear.”

In what’s become a “Survivor” template, the cast had unofficial parties the night before the finale and a post-show bash with fans at the Parlor on Melrose in West Hollywood. Here are some of the late night antics.