For an artist who has not monetized any of his 200 million plus YouTube views, DJ Earworm is in a really good mood.

The producer, DJ, video artist and cult favorite (born Jordan Roseman) recently unleashed the latest in his annual mashup franchise, “United State of Pop,” a new track born from the DNA of the top 50 songs of 2015. He subtitled it with an overture symbolic of this year, “50 Shades of Pop.”

Throttled by The Weeknd, Taylor Swift, Diplo, Maroon 5 and late-breaking Adele, Earworm is closing in on 5 million views and over 5,000 comments in only a week.

By reinventing many tunes that wore out their welcome and fell off passion playlists months ago, Earworm’s curtain call at the close of the year has rightfully become a sensation in quantifiable metrics and subjective critical praise.

TheWrap met with him in West Hollywood to peel back the curtain and get to know the man behind the annual holiday treat.

I imagine you create the audio track first and then lay the video back on to it afterwards. 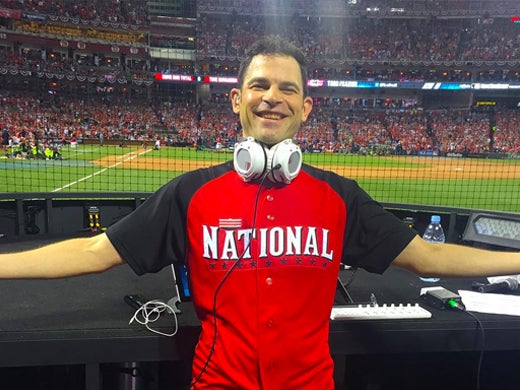 Earworm DJ’ing at the MLB All Star Game in Cincinnati in July 2015. (Instagram)

You must have an amazing relationship with the labels. Are they feeding you audio isolation tracks?
No. I don’t have access to materials that most people don’t have. Every once in a while through something I’ve taken on throughout the year, I may have access to one or two of them. Everything else, was something anyone would have access to. I do a lot of extraction myself where I can try to create my own a capellas and separations.

A lot of times the tracks are floating around the Internet, so I have gotten a lot of them just through searching, but it does not require special access. It’s a very democratic art form, mashups.

The track and video dropped last week. In the final days before release, do you ever get to have a Thanksgiving?
I always take Thanksgiving off. It’s always a very nice day because it’s a reprieve. That’s the one day I allow myself. Then, it’s right back to work.

How early do you start working on “United States of Pop” each year?
I’m thinking about it all year. I look at the charts every week and I analyze stuff and I listen to whatever is new and make sure I am up to date on what’s happening. Starting in September, I start crunching the numbers and thinking about it, maybe throwing some sketches together in September/October. Once November happens, then it’s like “OK, this is serious.”

For your technical rig, what are your platforms and software of choice? Are you editing the video yourself?
This year I did have some help (on the video edit) just to take some of the burden off. I use Final Cut Pro X, which I know isn’t the most pro thing, but I like that it can handle all the formats that I throw at it. It can make things happen very quickly.

For a majority of the audience, they see you as this comet that shows up once a year in December delivering this great work, but I saw you producing opens and performing at the Critics Choice Television Awards and DJ’ing Major League Baseball’s “Home Run Derby.” What’s the rest of the year like?
I’m still around the other 11 months. (Laughing heartily). I do college shows … I do shows everywhere. I get a lot of custom production and a lot of work for different musical artists, big corporate gatherings.

I’ve done the opening for the red carpet for E! for the Grammys, but I’ve never gotten in to the actual event. I would love to. About 10 years ago, the awards shows started doing their mashups as a fixture, I’m still waiting by the phone 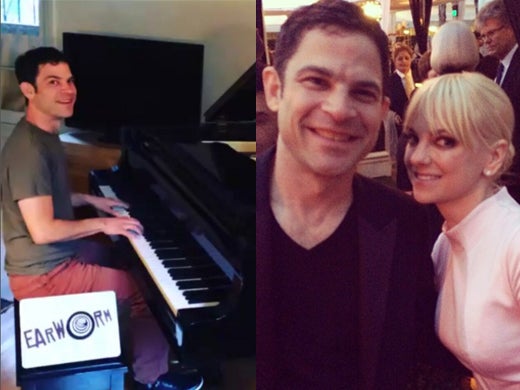 Earworm playing the chorus to “Drone,” and with Anna Faris at the Critics Choice Television Awards (Instagram)

In terms of rights and strikes, does YouTube leave you alone?
YouTube has deals with all the labels so that they are able to monetize it. SoundCloud did not work their deal out with Sony, so they came after them really hard and anything that was Sony or contained their [music] got taken down.

And you get to monetize these videos?
I do not. That’s why I’m still in the modest [West Hollywood] apartment.

People seem to love 2009’s “Blame it on the Pop.” Do you have one that you personally like better or you find yourself going back to more?

I can’t say that I go back and listen to them. I hear them enough. When I DJ, I’ll break them up. I don’t listen to them on my spare time.

I do love 2009, not just from the reaction it gets from people but also what it represented in terms of my discovery process. When I got there I feel like I discovered this new cut mech[anism], that was like “Oh, this is what it is supposed to be. This is what it could be.” It took my career from 0 to 100. It was great.

I’ve seen pictures of you in the studio with Will.I.Am. Has anyone you’ve featured reached out to you?
The very first “United States of Pop” in ’07, I got contacted by Maroon 5 and their management. I ended up doing some mashups for them and a few remixes. That was really cool.

Let’s talk about your new original single “Drone.” Who is the female vocalist?

She is quite talented and she is anonymous. She is … (pausing) she’s great, she’s beautiful. She’s got some songs of her own. She’s appeared on some other people’s stuff, but she wants to stay unknown.

The whistle on there is so catchy. It reminds of the Max Martin production for Adam Lambert’s “My Heart is a Ghost Town.”
Having that extra reverb took it to the old West. It brought up this “gun duel” subtext of the whole thing. I never wanted to treat the drone as a weapon, but having that vibe it kind of brings about subconsciously.

With how much drones are in the news, I would not be surprised to see this synced in a lot of licensing plays.
I hope so. I’m waiting … I’m waiting.

Earworrm’s new single “Drone” is available on iTunes here and to stream on Spotify here.