The low-budget, heavy on the scares formula that has made horror films like “The Purge” and “The Conjuring” among the biggest hits of the years continued to reap dividends this weekend as “Insidious: Chapter 2” trounced studio estimates and dominated the box office.

The FilmDistrict and Blumhouse Productions film opened to north of $$41 million in 3,049 locations, according to studio estimates.  It had been projected to open in the $30 million range, but built up an impressive head of steam in terms of pre-sales heading into the weekend.

The numbers for the film fall just short of the $41.9 million that director James Wan‘s previous effort “The Conjuring” opened to last July. The sequel’s debut far eclipses the $13.3 million that the original “Insidious” racked up in 2011.

“Blumhouse has this micro-budget formula down pat and James Wan has mastered the scary movie,” Jim Orr, president of distribution at FilmDistrict, said. “This film delivers in every way. The original film built up a lot of good will and this film works seamlessly with the original, but it’s even more intense.”

With “The Conjuring” and “Insidious: Chapter 2” both breaking out in a big way, Wan has now joined the A-list — a promotion that becomes official when “Fast & the Furious 7” roars into theaters next year with the horror maestro at the steering wheel.

It is also a victory for Blumhouse and producer Jason Blum who helped pioneer the low-cost, high-fright value formula so deftly employed by “Insidious: Chapter 2” with films like “The Purge” and “Paranormal Activity.” The current entry in the “Insidious” canon cost a mere $5 million to produce.

Also read: J.K. Rowling on Why She Decided to Return to Wizarding World of Harry Potter

“The Conjuring” was helped by strong reviews, but not so Wan’s latest effort. “Insidious: Chapter 2” earned a drab 36 percent “rotten” rating on the critics aggregation site Rotten Tomatoes, but audiences gave it a solid B+ rating, according to Cinemascore. “Insidious: Chapter 2” now has the biggest opening for a horror film in September, besting the $30 million debut of “The Exorcism of Emily Rose.”

Orr said that opening the film on Friday the 13th helped get horror fans in the right spirit. He speculated that horror has been such a consistent genre of late, because something about the shared experience of being scared is leading moviegoers to see these movies in theaters.

“These titles are hitting notes that capture the imagination of the audience,” Orr said. “The concepts are gripping and they’re extraordinarily well-executed.”

Also opening this weekend, Relativity’s mob comedy “The Family” earned $14.5 million. It’s a decent debut for the film and one of the better openings of star Robert De Niro‘s non-“Meet the Parents” movies.

Budgeted at $30 million, the film opened in 3,091 theaters. Reviewers were uncharitable handing the film a 33 percent “rotten” rating on Rotten Tomatoes and audiences didn’t like the movie much better either, giving it a C Cinemascore rating.

Kyle Davies, Relativity’s president of worldwide distribution, said the studio was pleased with the results and had expected the film to open to between $11 million to $13 million. He noted that the movie skewed older, with more than 80 percent of the audience clocking in at over 25 years of age. He predicted the demographic appeal and the film’s distinctiveness would help it play well going forward.

“There are some real comedic elements and there are not a lot of comedies in the fall, so we think that bodes well for how the movie is going to play in the next few weeks,” Davies said. “Older moviegoers historically are not storming the theater on day one. Because this plays to older audiences, we think it’s not going to be as front-loaded.”

In its second week of release, Vin Diesel‘s action sequel “Riddick” fell a steep 63 percent to earn a little over $7 million. Its domestic total now stands at just over $31 million.

Latino comedy “Instructions Not Included” continued to draw crowds, grossing $4.2 million in 932 locations, which brought its domestic total to $26.6 million in its third week of release.

Also of note, “Lee Daniels’ The Butler” added $5.6 million to its box office take, which pushed the sprawling civil rights drama past the $100 million mark domestically. It wasn’t the only film to hit that particular milestone. Sony Picture’s apocalypse comedy “This Is the End,” passed the $100 million mark domestically in its fourteenth week of release.

Sony also decided to try to lure tweens back to see “One Direction: This is Us” by adding four songs and 20 minutes of additional footage to the concert film.  Even with the extra chances to ogle the fabulous five-some, the film still sank more than 40 percent from the previous week, adding $2.4 million to its gross. 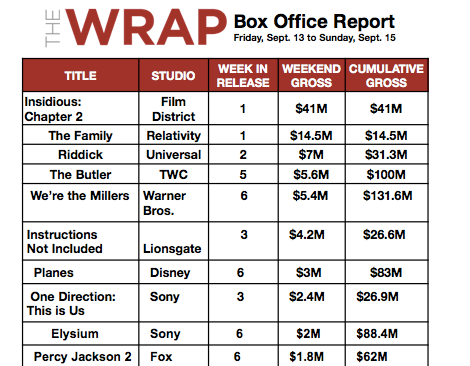