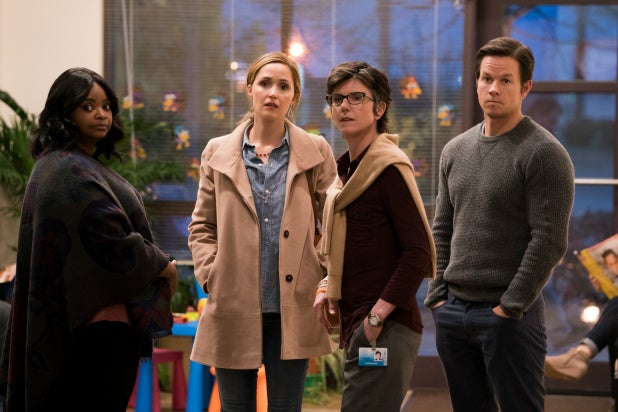 Mark Wahlberg and Rose Byrne adopt three kids at once in “Instant Family,” a film that looks, sounds, and sometimes acts like a dumb comedy. But stick with it, and you’ll discover that Sean Anders’ latest is an earnest, moving family drama that just happens to be kinda funny.

Anders, who previously directed mediocre-to-painful comedies like the “Daddy’s Home” films and “That’s My Boy,” starts “Instant Family” off his usual way, with adults who behave like overgrown children and a comedy flashback in which Wahlberg accidentally kills another kid’s father. The stage is set, and it’s tempting to give up and go home now, before the real show begins.

But “Instant Family” cleverly uses all that early, immature humor as a contrast, because once Pete (Wahlberg) and Ellie (Byrne) decide to adopt three kids, they’ve set themselves on a path to real maturity. Anders’ film gets increasingly serious as it goes, even earning more than a few genuine tears in its finale.

Pete and Ellie come to the conclusion early on that there are too many kids without parents in the world, so rather than have their own, they decide to look into adoption. Once they’ve entered the process, they take part in classes to prepare them for foster care and adoption, led by two professionals played by Tig Notaro and Octavia Spencer.

At first, Notaro and Spencer seem egregiously overcast in these small supporting roles, like an alternate-reality production of “Hamlet” in which Daniel Day-Lewis and Meryl Streep play Rosencrantz and Guildenstern. The two actresses have their fair share of comedic asides and eye-rolls at all their wacky students, but “Instant Family” desperately needs their gravitas, because despite its cheerful tone, this movie is about to get dark.

“Instant Family” understands and illustrates that the foster care and adoption process is an emotionally complicated one for both adults and children, and the movie stops dead early on, just so one teenager who has been through the system can discuss her physical and sexual abuse, and her subsequent struggles with addiction.

The pain of separation, of loneliness, of being treated like a commodity by foster parents who decide to give up on the process or who are only in it for the paycheck — these experiences take a heavy toll on a child. The result is that, often, children who want parents wind up developing such impenetrable defense mechanisms that they reject affection and love. “Instant Family” goes out of its way to explain all this and then to show the reality, as Pete and Ellie adopt three seemingly perfect kids who each, in their own way, reveal that they are tricky to parent and are averse to joining their family.

There’s Juan (Gustavo Quiroz, “Peppermint”), an accident-prone child whose knee-jerk reaction to everything is to apologize, desperately. There’s his little sister Lita (Julianna Gamiz, “East Los High”), a screaming fountain of neediness. And then there’s their big sister Lizzy (Isabela Moner, “Sicario: Day of the Soldado”), who has been taking care of her siblings all these years, who herself yearns for affection but resents it whenever Pete and Ellie offer it.

And dang it, there’s Pete and Ellie, who have just signed on for a massive responsibility and who, at times, completely regret that decision. One of their hardest nights ends with the two of them sitting in bed and reminding themselves that they don’t have to keep these children, that their lives would be easier without them, and that could simply be that.

But it’s a momentary fantasy, and they know it. They’re never abandoning these children; they’re not terrible people, but at least they’ll keep their sense of humor about it. “We gotta just accept that we made a terrible mistake,” Pete concludes, smiling. “And our lives are mostly going to suck now.”

Wahlberg and Byrne are well suited to this material. At their best, they are intensely likable actors who shine when their characters are thrown into situations that are beyond their abilities. They respond with desperation, frustration, anger, self-hatred, and always in a way that makes them more likable. They’re matched at every turn by their young cast, especially Moner, who once again proves that she’s one of the most natural and charismatic young actors working today. And of course Margo Martindale, playing Pete’s mom, is perfection itself, because she’s Margo Martindale, and when is she not?

The title “Instant Family” is kind of perfect, because the expression is completely wrong, and makes about as much sense as “overnight success.” It requires a seemingly impossible amount of work, internal and external, to become such a thing, and yet the rewards are invaluable. Actors like Byrne, Notaro, Spencer, Moner, Martindale and even Wahlberg can’t help but be funny, but it’s not because their story is inherently hilarious; it’s because their characters face their problems with humor and overcome them the same way.

After all the wacky Christmases, after all the silly face-painting fiascoes, after all the screaming montages and more, this family gets properly forged. “Instant Family” comes together because their problems are believable, and they never give up on each other, even through the tough parts. And even though the film seemingly exists as a well-intentioned advertisement for the adoption process, complete with a website-promoting title card at the end, it’s an exceptionally good one. It’s positive about the system and its goals, but it’s also honest about how nearly impossible it can seem. And it’s completely right when it comes to the conclusion that love is always worth the trouble.

“Instant Family” is a decent, involving, endearing story, with funny performances and heartfelt, entirely earned dramatic crescendoes. And although it gets still a little too silly from time to time, and it sometimes undermines its biggest emotional moments with tiny jokes, and although there isn’t nearly enough Margo Martindale (as if there ever could be), it too is worthy of love.