Well, this pretty much guarantees that every winner will show up at the Governors Ball.

They all do anyway, but on Tuesday the Academy announced a powerful incentive to make sure that winners appear at its post-Oscar soiree: for the first time, Oscar recipients will be able to have their statuettes personalized on the night of the show.

In previous years, winners went home after the show with a blank Oscar, and then were asked to return it to the Academy at a later date to have the personalized nameplate affixed.  (In some cases, in fact, winners were mailed the nameplate, complete with four tiny screws and instructions on how to attach it.) 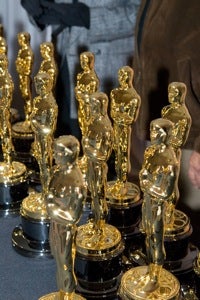 The Academy says it will recycle the nameplates of the nominees who don’t win, though that would be one hell of a souvenir to take home: the plate that would have been attached to your Oscar, if you had won one.

AMPAS announced a flurry of other Governors Ball news on Tuesday as well.  Wolfgang Puck will create the menu for the 16th consecutive year, which means his pastry chef Sherry Yard’s trademark little chocolate gold-dustedOscars will make a return appearance as well.

Another Oscar vet, Cheryl Cecchetto, will produce the ball for the 21st consecutive year. In the press release announcing her appointment, Cecchetto promised to "fuse eclectic and innovative design elements reminiscent of the late 1930s ‘Streamline Moderne’ style."

And Jeffrey Kurland, an Academy governor from the art directors branch, will chair the event for the first time.

The Governors Ball will be held at the Grand Ballroom, on the top level of the Hollywood & Highland center.