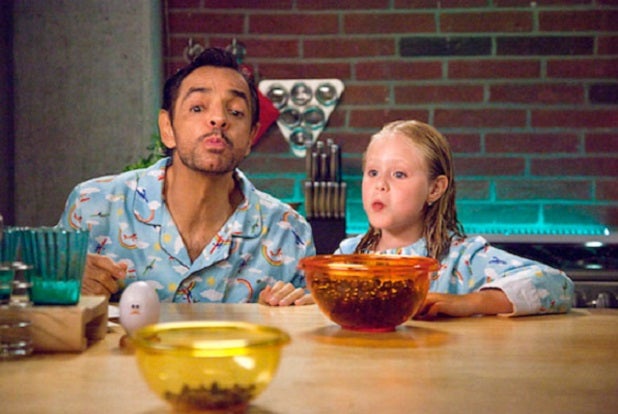 Starring and directed by Eugenio Derbez, “Instructions” grossed an estimated $3.4 million in its fifth weekend, bringing its domestic total to an estimated $38.6 million. The announcement was made Sunday by Lionsgate, which founded Pantelion in a joint venture with Latin media giant Groupo Televisa.

“Instructions Not Included” passed the 2006 horror thriller “Pan’s Labyrinth,” which grossed $37.6 million at the domestic box office, to become the new record holder. The Pantelion release also became one of the four highest-grossing foreign-language films ever in the U.S., ranking behind only Taiwan’s “Crouching Tiger, Hidden Dragon,”  Italy’s “Life is Beautiful” and “Hero” from China.

It’s a big financial win for Pantelion, since its production budget was just $5 million.

“We’ve been building our brand and our audience for three years, and we’re very pleased that our efforts have resulted in a record-breaking hit,” said Pantelion’s chief executive Paul Presburger. “The film’s success reaffirms our belief that there is a large audience in the U.S. with an appetite for commercial films with Latino characters and themes.”

That success has a lot to do with Derbez, who wrote, produced, directed and starred in “Instructions.” He plays an Acapulco playboy who heads to L.A. to search for a former fling who has left a baby on his doorstep. He takes the child with him and they don’t find the mother, but he finds a new life as a Hollywood stuntman, and little Maggie becomes his on-set coach.

The 52-year-old Mexican comic is at the peak of his popularity in Latin America — and Pantelion leveraged that and its tie-in with Televisa to maximum effect.

The marketing campaign focused almost exclusively on Hispanic adults aged 18-49 and kicked off in July, when Derbez received a lifetime achievement award on “Premios Juventud,” an annual awards show on the Univision network that drew 10 million viewers. Since then he’s made numerous guest appearances on network’s shows spent the last two weeks touring the U.S. to promote the film.

The storyline and the incredibly cute Loreto Peralta – who plays the little girl – struck a major chord with audiences, who gave it an “A+” CinemaScore, the first since the Jackie Robinson biopic “42’ achieved the feat in April.