“Cloudy With a Chance of Meatballs 2” topped the domestic box office this weekend, as food-focused inventor Flint returned to multiplexes for the first time in four years and served up a welcome $35 million victory for Sony.

The “Cloudy 2” debut is roughly what the studio had projected, though analysts were more bullish on the first new kids film in six weeks in 4,001 theaters, a September record. It failed to top the best September opening ever – the $42 million taken in “Hotel Transylvania” on the same weekend last year – but it beat the $30 million opening of the 2009 original “Cloudy With a Chance of Meatballs,” which went on to take in $243 million globally.

The win by “Cloudy 2,” in which Bill Hader, Anna Faris and Will Forte provide the main voices, gets fall off to a solid start for Sony. The studio had a terrible summer, with flops “After Earth” and “White House Down” that last week cost marketing chief Marc Weinstock his job. Earlier, it brought in PR crisis expert Charles Sipkins as its new senior communications executive.

“This is a really nice win for us,” Sony’s distribution chief Rory Bruer told TheWrap Sunday morning, “and positions us for a strong run both here and overseas.”

He didn’t want to look back, but the triumph had to provide some healing after a turbulent couple of weeks at the studio.  And the prospects for the rest of the year look strong, with Tom Hanks‘ “Captain Phillips” in two weeks,  a “Carrie” remake in October and David O. Russell’s “American Hustle” and George Clooney’s ‘The Monuments Men” in December.

Produced for $78 million, — modest for a 3D animated movie — “Cloudy 2” establishes the third franchise in the past five years for Sony Pictures Animation, which was also behind “Hotel Transylvania” and “The Smurfs.”

Not surprisingly, 80 percent of the “Cloudy 2” audience was comprised of families and 43 percent was children under 12. They went home happy, giving it an “A-” CinemaScore.

The numbers for “Rush’ were more solid than spectacular, but Universal knew the auto racing tale would be a tricky sell in the U.S., where Formula One has never caught on, even though it is one of director Howard’s most well-reviewed movies.

The studio expanded “Rush,” which stars Chris Hemsworth, who’ll hit screens in “Thor” later this summer, and Daniel Bruhl as 1970s drivers James Hunt and Niki Lauda, into 2,297 theaters after its limited debut last week. The film’s audience, which was 52 percent male and 47 percent under 40, gave it an “A-” CinemaScore.

“Baggage Claim,” directed by David E. Talbert and starring Paula Patton, Taye Diggs and Derek Luke, made back its $9 million production budget in its first three days of release for Fox Searchlight. It played primarily African-American and female, according to the distributor, and also received an “A-” CinemaScore.

“We’re happy with this start and look forward to being in the Joseph Gordon-Levitt business for some time,” said Relativity distribution chief Kyle Davies. “This is a different sort of movie that’s going to provoke plenty of discussion and we think that, and the great reviews, are going to carry it over the next several weeks.” A release schedule heavy on drama and light on comedies should help, too.

Scarlett Johansson, Julianne Moore and Tony Danza co-star in the film, which Relativity acquired for $4 million at this year’s Sundance Film Festival. 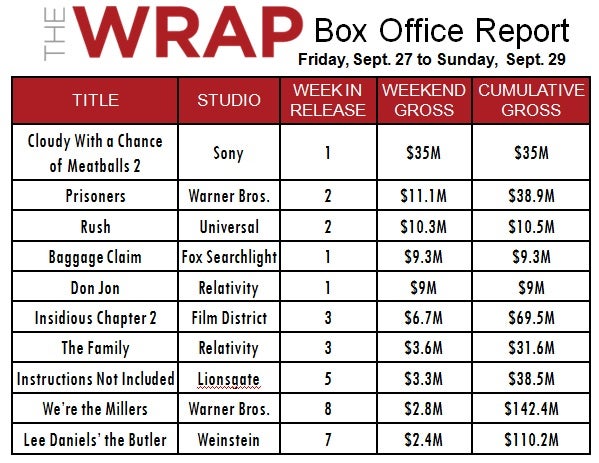