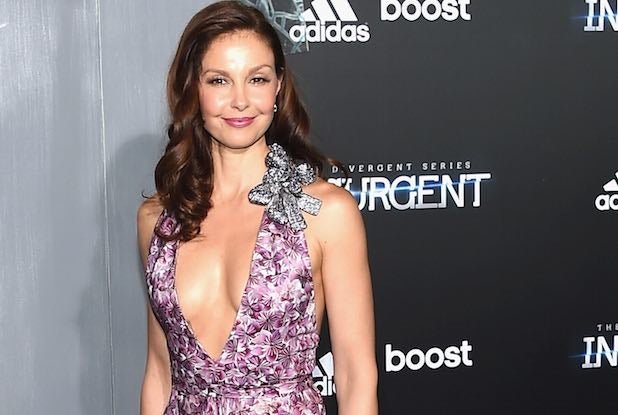 Ashley Judd, who plays Shailene Woodley‘s mother in the “Divergent” franchise, is using her celebrity to call attention to the “extraordinary” amount of gender-based abuse that women are subjected to on social media.

In an interview that aired on “The Today Show” on Tuesday morning, Judd expanded on her mission that she talked about with MSNBC’s Thomas Roberts on Monday, when she announced “I’m pressing charges.”

See video: Lena Dunham on Dealing With Vitriolic Internet Trolls: I React With ‘Class and a Little Bit of Sass’

“The amount of gender violence that I experienced is absolutely extraordinary,” Judd told ‘Today’ correspondent Craig Melvin. “A significant part of my day today will be spent filing police reports at home about gender violence that’s directed at me on social media.”

Judd, a Kentucky Wildcats fan, began speaking out against the online bullying on Sunday after some Twitter users responded to a slam she tweeted against her alma mater’s SEC Championship opponent.

“I think Arkansas is playing dirty,” she wrote.

When when I express a stout opinion during #MarchMadness I am called a whore, c—, threatened with sexual violence. Not okay.

I am sorry to retweet but this is a typical example. “@Leeroy_MAX: .@AshleyJudd Go suck on Cal’s two inch dick ye Bitch whore.”

Example: I am mentally weak for not tolerating sodomy threats. “@AshleyJudd oversensitive liberals like are you that mentally weak?”

Also read: Iggy Azalea Ditches Social Media Over ‘Hatred and Pettiness': ‘Internet Is the Ugliest Reflection of Mankind There Is’

“That many people, that explicit, that overt,” Judd emphasized to Melvin when speaking about the volume of online harassment she has received.

Twitter CEO Dick Costolo said last month that he was “ashamed” of his company’s failure to deal with online bullying.

“We suck at dealing with abuse and trolls on the platform and we’ve sucked at it for years,” he said in in a memo to staff. “It’s no secret and the rest of the world talks about it every day. We lose core user after core user by not addressing simple trolling issues that they face every day.”

In a new statement, the company said, “We now review five times as many user reports as we did previously, and we have tripled the size of the support team focused on handling abuse reports.”

No oneÂ said being a movie starÂ is glamorous all the time, and that's especially true for the stars of the futuristic sequel, "Insurgent." While theÂ actorsÂ looked amazing on the red carpetÂ at the film's world premiere Wednesday in London, Shailene Woodley and Theo James admitted filming the follow-up to 2014's "Divergent" was brutal at times. "It was loads of fun. The thing about this film is it looks like [we are running for] seven minutes but in reality, we were running for two months," Woodley told the Irish Independent.

Getty Images Being winded was the least of James' concerns. "I got hit in the face during the train sequence so I got clocked, but the film makes you feel tough," the British actor joked. While she plays leather-clad tomboy Beatrice "Tris" Prior in the film based on Veronica Roth's YA novel, Woodley wore a sophisticated ivory Ralph Lauren Collection gown with an openÂ backÂ to the event at the Odeon cinema in Leicester Square. James, who plays love interest Tobias "Four" Eaton, was equally dashing in a Dolce and Gabbana suit.

Getty Images Set in a future-dystopian world where a micro-society has been divided into factions, Tris (Woodley) is a âdivergent,â someone whose innate abilities place her into more than one of those categories. Following the massacre of her parents and the other members of the altruistic Abnegation faction, Tris -- along with boyfriend Four (Theo James) and the not-entirely-trustworthy Peter (Miles Teller) -- are hiding out from wickedly ambitious Jeanine (Kate Winslet) with the gentle souls of Amity. Octavia Spencer, Naomi Watts and Ansel Elgort also star in "Insurgent," which opens in the U.S. on March 20.

“Harry Potter” had four houses at Hogwarts, “Twilight” had two hunks competing for the affection of one woman, “The Hunger Games” has 12 districts, and “Divergent” — the next YA franchise Summit is preparing to unleash — has five factions. Here are the faces to know in the bravest bunch of them all.

Shailene Woodley as Beatrice 'Tris' Prior -- the teenage heroine in author Veronica Roth's YA novels. She chooses to join the Dauntless faction, although she is Divergent, meaning she can fit into a variety of factions.
View In Gallery
View In Gallery