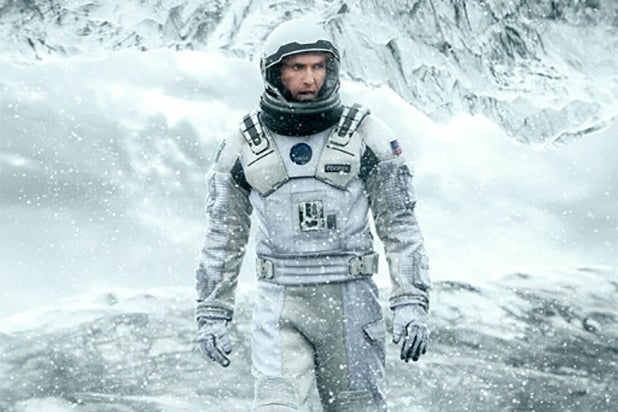 As the blast-off date of Christopher Nolan‘s hybrid sci-fi/cli-fi movie “Interstellar” approaches on Nov. 7, millions of fans have already been checking out the three trailers online and wondering what comes next. And what exactly is the movie all about? Is it a sci-fi extravaganza, or is it part of the new genre of cli-fi movies that focus on climate change and global warming issues, even if the characters venture out into space as well?

Peter Sinclair, a savvy political cartoonist and climate activist who runs a popular website titled “Climate Denial Crock of the Week,” recently post the third and latest “Interstellar” trailer which he found via a Slate post by Forrest Wickman, and Sinclair headlined his post: “‘Interstellar’ may be a cli-fi classic.”

Ever since Time Magazine ran a large spread on the rise of cli-fi movies in Hollywood in its May 19 issue, more and more studios have been singing the cli-fi tune. When “Into the Storm” was released, the press release from the PR firm running the movie’s promotion that was sent to the international press called the movie a cli-fi movie. The result was that movie critics and websites in Brazil, Mexico, Spain and France started calling the movie a cli-fi flick.

The cli-fi genre term has caught on for a few reasons. One, it’s in the air. Climate change news stories are in the newspapers and online sites every day now. Two, Time Magazine has a wide international pull and it also is good at penetrating Hollywood PR people. Three, The New York Times Room for Debate forum on cli-fi reached a large community of academics and film people as well. And four, just as last year’s “Gravity” was not really a sci-fi movie even though it was billed as such, so too is “Interstellar” much more of a cli-fi movie than a sci-fi movie.

But why not satisfy both camps, the sci-fi fans and the growing cli-fi camp, by calling Nolan’s movie a hybrid sci-fi/cli-fi flick? That’s where I am going to park my car for now. “Interstellar” is both a sci-fi movie and a cli-fi movie, and movie critics and audiences worldwide will have the final say. And maybe, along with a few well-placed op-eds in the Los Angeles Times and the New York Times as well.

Remember this, too: The cli-fi meme has much of its origins here at the Wrap where I have been writing about for a few years, pushing the the idea uphill and explaining the background of the term.

When watching the latest “Interstellar” trailer I picked up these quotes and mention them here to show the cli-fi themes in the Nolan’s story.

At one point Michael Caine‘s character says to Matthew McConaughey‘s character in that deep British voice of his, ”Your daughter’s generation will be the last to survive on Earth.”

“This world’s a tragedy,” says McConaughey’s character in another segment of the trailer. “It’s been telling us to leave for a while now.”

“Get out there and save the world,” says Caine as the space ship prepares to take off for parts unknown. Save the world? The Earth is in need of saving? This is definitely cli-fi territory, no?

“You might have to decide between seeing your children again and the future of the human race,” says another character.

“We have a mission but our mission does not work if the people we leave here on Earth are dead by the time we pull it off,” says yet another.

“We’ll find a way, we always have,” intones another voice.

Where are they going? Why are they leaving Earth (and that’s Earth with a capital E)? Did climate change and global warming lead to what comes next?

“The first half of the new trailer focuses on what appears to be the movie’s environmental message: Matthew McConaughey talks about the importance of adapting on the movie’s climate-change-wrecked Earth,” Slate’s Wickman wrote, adding: “But the second half takes us deep into the movie’s space travel sequences, and shows us a number of striking new images.”

Whatever you’re looking for, and wherever you”re coming from, you’ll find it in Nolan’s “Interstellar.”

For astronaut McConaughey and the rest of his crew (played by Anne Hathaway and Wes Bentley, among others), there is a world to save and that world is our Earth.

What will matter is that come Nov. 7, a whole new Nolanesque universe will open up and invite the world inside. I’m calling it a cli-fi classic, taking the opinion of Peter Sinclair as on target. You?