After helping to pioneer the personal management field in the 1960s, Mace Neufeld used his now-legendary eye for talent to recognize his own ability as a fledgling producer. He launched his career in film and went on to produce such features as “The Frisco Kid,” “No Way Out,” four Jack Ryan films based on the Tom Clancy novels and, opening this weekend, Warner Bros.’ “Invictus,” starring Morgan Freeman and Matt Damon with Clint Eastwood directing.

Neufeld spoke with Eric Estrin about his early days as a songwriter, being the "N" agent in the middle and banking on "The Antichrist." 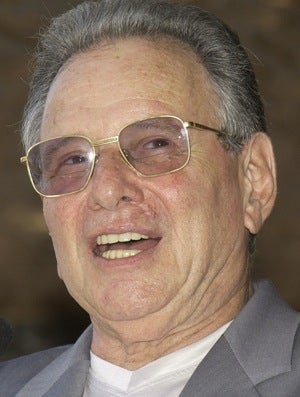 My personal management company started in New York quite by accident. At the time, I was writing songs with Bob Arthur. We used to go around and play some of our songs in some of the clubs.

I walked into a club on the East Side, and there was this girl at the piano by the name of Dorothy Loudon, and she was singing and playing — and I thought she was great. She’d just come out of college, and she asked me if I could get her a record contract. And I said, well, I certainly could try.

My motivation was, if I get her a record contract, she’ll record my songs — you know, like Burt Bacharach and Hall David did with Dionne Warwick.

So I did get her a record contract, and then she asked me to manage her. I didn’t have the vaguest idea what that was. But I knew the record companies and the music publishers, and so we made a few demo records with her, and I took them around.

She was signed by RCA Victor, and that kind of started me in the management business.

That business got bigger and then in 1962 I moved out to California and, like Topsy, it just grew, with clients like Don Adams, Don Knotts, Herb Alpert, the Carpenters.There weren’t a lot of management companies at that time. I found myself doing things like writing acts and special material for clients and not being able to charge them for it because I was getting a commission.

Then I formed a new company called BNB. I was the N in the middle, and down the hall from us was Bernie Brillstein, who had a company called Management III. Bernie and I were very friendly, and he said, "Wow, what a great idea, going into business with your clients." But you know, I didn’t feel right about that. So eventually I gave up my management business.

My heart always was more into the creative side, and I thought, you know, well, I’ve got some talents of my own. I’ll try and manage myself. I had never really loved management, and I thought that it might be — silly me — a conflict of interest with producing. I decided that I would just give my management company back to my partners and be a full-time producer. My wife said go ahead and do it, so I gave up quite a successful business.

I had a friend, Harvey Bernhard, who was a producer, and he came to me with the idea of doing this film which had been called “The Antichrist.” We hired David Seltzer to write a screenplay for a minimal amount of money, and he turned out almost exactly what the first film was.

We made a deal over at Warners with John Calley, whom I had known in New York when I was producing a TV show called “Laugh Lines.” and he was a junior account executive over at Ted Bates Advertising. That’s how I met him. We had Nichols and May on that show, and Dick Van Dyke and rotating panelists.

John asked me if I ever got an idea for a film, would I please bring it to him, because he had a friend who wanted to be a film producer. And so I brought him the idea for “The Omen,” and he took it to Marty Ransohoff, who was at Filmways at that time. John eventually became head of Warner Bros., and that’s when he bought what was now called "The Omen."

But they let it go after a year. I think they’d been holding it to see how the sequel to “The Exorcist” was gonna be. Then Dick Donner took it to Alan Ladd and Jay Kanter over at Fox, and we made the film.

It came out of the box really strong. It was into net profits after the opening weekend, and I thought, "Wow, this is great! I’m not gonna have to talk to clients or clients’ wives ever again. I’m never gonna be worried about getting fired by an actor." Several of my friends said, "Listen, Mace, why don’t you quit now while you’re ahead?" But I had a supportive family, so that was it. I went out and dove in.

It did take me four years to get my next movie done, but then all of a sudden I got five things ordered within a three-week period, and I was off and running.