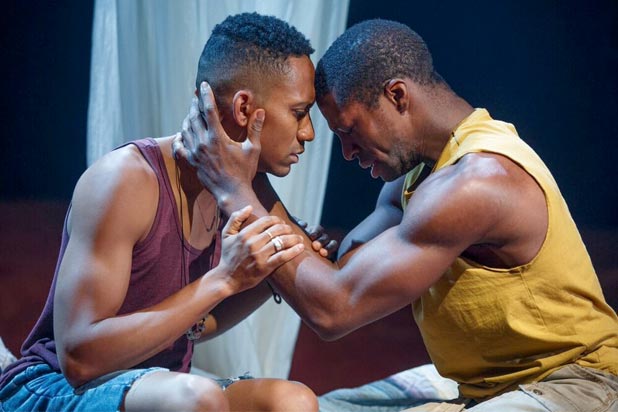 Compelling gay characters make a much-needed comeback on the New York stage this month. Matt Gould and Griffin Matthews have turned their real-life romance into a very different kind of musical, “Invisible Thread,” which opened Wednesday at the Second Stage Theatre. At last, a show in which there are no affluent gay married men sitting around talking to their overly waxed navels!

On the contrary, Matthews left New York City in 2005 to make humanitarian visits to Uganda, where he founded an education fund called the Uganda Project. That inspiring backstory led to “Invisible Thread,” which sounds like but is not “The Book of Mormon” minus elders and big yucks.

At its heart, “Invisible Thread” is an unrequited love story between Griffin (Matthews essentially playing himself with self-deprecating humor) and Jacob (Michael Luwoye), one of the teenage orphans he attempts to give an education. It’s unrequited on both ends, since neither man gets what he wants.

Matthews and Gould wisely never let us know exactly what’s going on between this teacher and student. Does Jacob love Griffin, or is he playing on his American guilt to win himself a trip to New York City? And is Griffin motivated by his a desire to educate Jacob or sleep with him?

Complicating the situation is the appearance of Griffin’s lover, Ryan (Corey Mach), who makes an unexpected trip to Uganda and, in a very 1970s sort of way, refuses to make a big deal out of his boyfriend’s possible attraction to Jacob. After all the Sturm und Drang nonsense about extramarital sex in recent gay-themed plays, Ryan’s liberal yet supportive attitude is a relief, as well as a pleasant surprise.

As a fantasy object, Jacob is unique, and it’s possible that many theatergoers will not see the character in this kind of romantic or sexual light. Gould and Matthews leave much unsaid here, as does Mach’s understated performance. Ideally, Jacob should have been cast younger. On stage, Mach and Matthews appear to be the same age, which is confusing at first.

But then all the teenage students (Tyrone Davis Jr., Kristolyn Lloyd, Nicolette Robinson, Jamar Williams) look to be pushing 30. Nonetheless, it’s genuinely thrilling at the curtain call when the characters’ real-life names and very impressive resumes are flashed across the upstage wall. Congrats to Gould and Matthews. Not only have they been successful in their artistic endeavor but in their philanthropy as well.

It’s unusual for a musical to tell two love stories involving only three characters. Since Gould and Matthews have taken creative license with their real-life story, it’s disappointing that they haven’t made Griffin and Ryan’s relationship as multi-faceted as Griffin and Jacob’s, which has much more emotional heft.

There’s nothing tragic or unresolved about what Griffin and Ryan do. They’re in love, they work together, and achieve a great deal. If only their respective reasons for going to Uganda were more dramatically gripping: Griffin gets kicked out of his church choir for being gay, and it takes him an inordinately long time to realize that his choice of destination is one of the virulently homophobic places on earth. Ryan follows him to Africa, not so much out of love, but because he’s tired of teaching music to children.

Gould and Matthews’s percussive score, fortunately, starts with a bang and blankets over these shortcomings in exposition, as does Sergio Trujillo and Darrell Grand Moultrie’s energetic African-based choreography.

With “Invisible Thread,” director Diane Paulus eschews the circus gimmickry and pyrotechnics of her recent Broadway outings (“Finding Neverland,” “Pippin”) to embrace a minimalist approach that suits the material to perfection. Griffin’s flying back to Africa to “save” Jacob is a spectacular low-tech effect that’s achieved, literally, on the backs of a talented ensemble of singing dancers. And all of them are well served by designers Tom Pye (set), ESosa (costumes), Justin Townsend (lighting), Jonathan Deans (sound), and Peter Nigrini (projections).