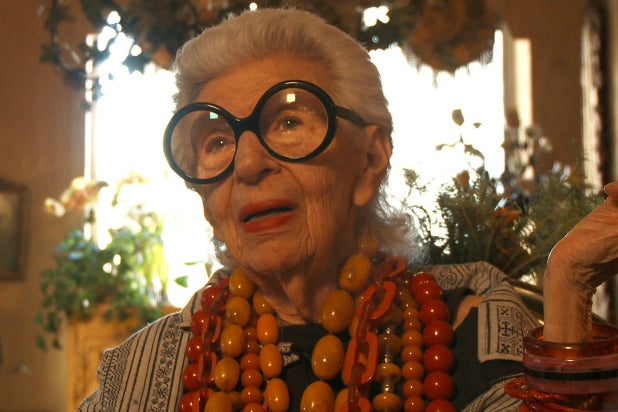 The recent death of American documentarian Albert Maysles places something of an unfair burden on “Iris,” his penultimate production. (“In Transit” was completed but has yet to be released.) This lightweight portrait of a style icon is best enjoyed without being seen as the one of the final films in a distinguished career that included such classic films as “Grey Gardens” and “Gimme Shelter.”

In terms of personal style, Iris Apfel might be seen as a distant cousin to “Gardens” protagonist Little Edie Beale — both women have a taste level and a gift for fashionable improvisation that all the money and designer labels in the world can’t buy. Where Beale could improvise an outfit that transformed sweaters into head coverings and tapestries into skirts, Apfel — still going strong in her 90s — mixes the biggest, clunkiest costume jewelry and wooliest, most colorful coats (plus her signature oversized eyewear) into standout ensembles.

Early in the film, Apfel remembers meeting the original Mrs. Loehmann of the legendary store Loehmann’s in the 1920s, when the fashion retailer told the young girl that she would never be pretty, but that she had something more important: style. Over the course of Maysles’ loving look at Apfel, we see how that style shaped her life and developed over the decades.

We meet Apfel’s devoted husband Carl (his 100th birthday celebration took place during the film’s shoot), who married her after a whirlwind courtship. In 1948, the two of them began Old World Weavers, a company dedicated to recreating older textiles and discontinued patterns. Between his background in advertising and hers at Women’s Wear Daily, they turned the company into a huge success, doing interior design on many of the nation’s finest homes, including the White House. (Carl recalls Jackie Kennedy being a tough client before Iris shushes him about talking out of school.)

The search for new textiles and new home furnishings sent the Apfels around the world many times, and on her journeys, Iris collected a broad and eclectic collection of costume jewelry and colorful outfits, so many that by 2005, she became the first living individual to be the subject of an exhibition at the Metropolitan Museum of Art’s Costume Institute. (That show not only toured, but also inspired some legendary display windows at Bergdorf Goodman, with mannequins all sporting the style legend’s owlish spectacles.)

“Iris” is a testimonial to a woman who marches to her own wildly dressed drum section; we see this nonagenarian posing for the cover of Dazed and Confused, guiding fashion students from the University of Texas through New York’s leading establishments in the rag trade, and generally devouring life with a gusto that someone half her age would envy.

There’s no real dark side to the storytelling here, as there is in ; if anything, this film feels of a piece to other recent celebrations of talented, busy women of a certain age like “: A Piece of Work,” “Elaine Strich: Shoot Me” and “Carol Channing: Larger than Life.” Maysles is clearly entranced by his subject, and all of the big names he interviews — including photographer Bruce Weber, designer Dries van Noten and Architectural Digest Editor-in-Chief Margaret Russell — are similarly smitten.

For those looking for regrets or profundity, “Iris” doesn’t dig particularly deep in that regard. But if you want merely to revel in the life of a singular figure who approaches her look and her life very much on her own terms, you’ll be charmed and delighted — and maybe even inspired to try something risky next time you get dressed up.