Despite the signficantly revised domestic box-office total, the film remains the fifth-best opener ever in the U.S. and Canada.

That’s the chant you’re likely to hear around the halls of Marvel Entertainment and distributor Paramount Pictures on Monday, after tentpole follow-up “Iron Man 2” opened to $133.6 million this weekend, the fifth best premiere in U.S. and Canada ever. 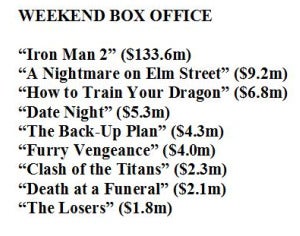 At least one box-office tracking firm had quietly predicted that the Jon Favreau-directed sequel would start out somewhere in the almost unimaginably huge realm of $165 million, which would beat “Dark Knight’s” record $158.4 million opening in 2008.

But with the $200 million “Iron Man 2” securing another $57.2 million in foreign grosses this weekend — and $194 million in international box-office revenue to date – there’s little disappointment about a film that has taken in $327.6 million worldwide so far.

“It’s all we can do to go on,” quipped Kevin Feige, president of Disney-owned Marvel. “This is a gigantic opening.”

“I don’t know how you can open a movie in May to over $130 million and be disappointed,” added Paramount distribution general manager Don Harris.

Certainly, record or not, the numbers are huge for a sequel that garnered an “A” grade from movie word-of-mouth tracking firm CinemaScore — a definite rarity for a four-quadrant blockbuster sequel.

"Normally, for a movie like this, you get anything in the ‘B’ or ‘B-minus’ range, and you’re celebrating in the streets," Harris said. "This is very encouraging for the long-run health of the movie." 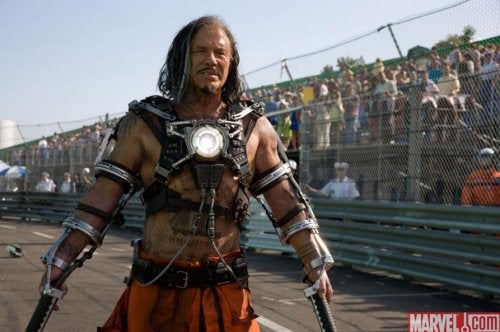 Not only did that beat previous 2D leader “Star Trek” ($8.5 million a year ago), it also usurped “Avatar,” which debuted to $9.5 million at the chain in December.

For their part, both Marvel and Paramount have expressed no regrets about releasing “Iron Man 2” in 2D. But might the film have easily broken “Dark Knight’s” opening revenue record if it had been able to take advantage of 3D up-charges?

“My guess is that it probably would have,” said one exhibition-chain official.

Downey Jr.’s next appearance in the “Iron Man” suit will be on May 4, 2012, when he co-stars alongside Chris Evans in Marvel’s “The Avengers,” which will be directed by Joss Whedon and written by Zak Penn.

Paramount, which has rights to distribute several more films in its Marvel deal, will put that movie out as well.

With the overall domestic box office up about 20 percent over the same weekend last year, Warner/New Line horror reboot “Nightmare on Elm Street” dropped 71 percent from its market-topping performance a week ago to $9.2 million. It finished in second place and has now grossed $48.5 million on a production budget of $27 million.

In third place, the DreamWorks Animation 3D film “How to Train Your Dragon” passed the $200 million mark domestically after seven weeks in theaters, dropping only 40 percent week to week to $6.8 million.

CBS Films’ J.Lo rom-com “The Back-Up Plan,” meanwhile, also continues to hang around, adding $4.3 million (a 36 percent drop) to a domestic total that now has reached $29.4 million. The film cost $35 million to produce.

Besides “Iron Man 2,” there was only one opening of any girth this weekend, with Focus Features’ newborn documentary “Babies” grossing $1.6 million at 534 locations.