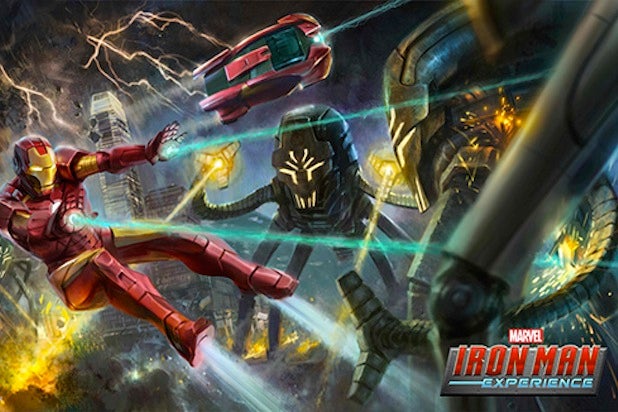 “Iron Man 3” was the biggest box office hit of the year, and Disney Parks plans on cashing in on the Marvel superhero’s notoriety at Hong Kong Disneyland.

The Iron Man Experience, slated to open in 2016,  is the first Disney attraction based on a Marvel character. It will be based within the Stark Expo — a fictional technology trade show existing within the Marvel universe — where guests will get to see the progression of Tony’s Iron Man suits and many other Stark innovations.

But that’s not all. Upon entering the thrill-ride portion of the attraction, visitors will take flight with Iron Man as he battles nasty alien invaders through the streets and skies of Hong Kong.

“We are extremely confident in and committed to the continued growth and success of Hong Kong Disneyland,” Tom Staggs, chairman of Walt Disney Parks and Resorts, said Tuesday. “I’m excited to see Iron Man become a part of that success when we welcome guests to the attraction in late 2016.”

Staggs made no mention of whether or not Robert Downey Jr., the actor who makes the big bucks to play Tony Stark on the big screen, will be involved.

“Iron Man 3” has made over $1.2 billion around the globe after hitting the box office in May, while “The Avengers” — in which Iron Man is largely considered the glue to the franchise — banked more than $1.5 billion after being released in theaters in 2012.