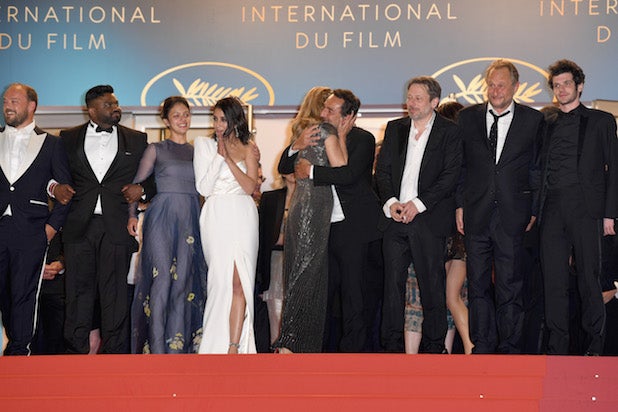 Long before the red carpet was unrolled or a single film had screened, many in the press circled in on a narrative: The Cannes Film Festival, it was decided, was a festival in decline.

And the vast majority of those pieces had another thing in common: They were written outside of France. The disparity between views has never been clearer than it has this year.

While many in the international press groused about a festival in decline, their French counterparts once again seized upon the Riviera, covering Cannes with the same intensity of interest and breathless focus as others covered the Royal Wedding (if not more — Harry and Megs are over and done in a day, while this party lasted 12 days).

While many in the press — TheWrap included, admittedly — longed for sizzle, there was the cast of “Sink or Swim” flashing their pearly whites up and down the Croisette.

Broadly appealing, chalk full of stars and likely to make a splash at the French box office, the film was exactly the kind of attention-grabbing title many in the press wished had an American counterpart at this year’s festival.

The middle-aged dramedy about a bunch of sad sacks who form a synchronized swim team has a real murderer’s row of bankable local talent, including arthouse leading man Mathieu Amalric (“Ismael’s Ghosts,” “The Diving Bell and the Butterfly”), comic star Virginie Efira (“Elle”) and heartthrob Guillaume Canet (who, alongside wife Marion Cotillard, makes up the country’s biggest celebrity couple)… and you’d better believe that all of them showed up.

Though the amiable crowd-pleaser won no points for originality, it offered the festival something of even greater importance: a dazzling red carpet, well-documented in the local press. While it offered critics little to chew on, it gave the French marketers the chance to plaster the Cannes logo upon the film’s poster, reinforcing the festival’s local prestige.

Don’t you forget: This festival is very much a product of its native country. The French government actually created it back in the 1940s, and it remains by far the largest cultural event in a land that defines itself by culture — and devotes a substantial part of its GDP to such pursuits.

Cannes occupies an almost mythic place in the French imagination, in turn receiving private and public subsidies commensurate to that heft. Despite what gets reported back, that is its primary identity.

So many of this year’s major trends stem from that. Those who remember last year’s go-round can attest that festival heads Thierry Fremaux and Pierre Lescure made Netflix feel very welcome in town. The impasse that led to this year’s blackout was not because the two honchos suddenly changed their minds. No, their hands were more or less tied by the country’s powerful exhibitor and distributor interests, many of whom sit on the festival’s board of directors.

Of course, Cannes has a powerful hand in shaping the film year — and years — to come. Think of it as the arthouse heavyweight championship, where promising new voices come to emerge as brand-name auteurs, and brand-name auteurs return to retain their title.

Some might not have heard of Nadine Labaki’s “Capharnaum” before its Thursday premiere, but heaven knows we’ll all get plenty of opportunities to misspell that title once the awards race gets into full swing. Spike Lee’s “BlackKklansman” was the most open of questions only one short week ago. Now it has ironclad critical support and a Cannes Grand Prize to its name. No account of the 2018 film year will be complete without it.

And Lee’s Grand Prize arrives, in a sense, at the expense of his “She’s Gotta Have It” partners at Netflix. Because if the festival wants to continue shaping the film year, it also has to let itself be shaped by larger local forces. Like letting French bigwigs call some shots. Like, say, programming “Sink or Swim,” and letting its glow of prestige shine down upon a film that will no doubt make exhibitors happy once it hits wide-release at the end of the year.

And hey, the film isn’t half bad! It has a fun hook and likeable stars. It’s the kind of project you can absolutely see the studios remaking in a couple years’ time.

But unless something changes soon, don’t expect to see the remake in Cannes.