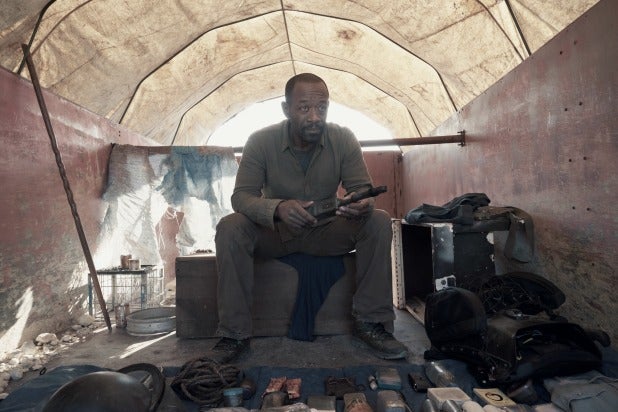 Ever since the creative powers that be behind “The Walking Dead” and “Fear the Walking Dead” first teased last year that a character would be crossing over between the two shows, fans have been wrestling with what exactly that could mean for the future of the two shows.

Morgan (Lennie James), the character who literally walked out of “The Walking Dead” and into “Fear” after the most recent season of the main show, may have teased how deep this crossover is going to go in the season 4 mid-season premiere of “Fear the Walking Dead.”

Also Read: You Can Watch Next Week's Episode of 'Fear the Walking Dead' Right Now

As the episode began, Morgan declared that he wants to leave Texas and head back to Virginia and reunite with his old pals back home. He even tries to get the remaining “Fear the Walking Dead” cast to go with him, though only Al (Maggie Grace) accepts the invitation, with the plan being that they’ll drive back in Al’s armored SWAT vehicle.

Of course, it looks like Morgan’s plan is going to be delayed a little bit by the main conflict of this half of the season. Not with other people this time, but with the elements — a hurricane has slammed Texas, and it’s putting everybody into a new sort of survival situation.

So it seems like we’re going to have to wait at least until the end of this season before we find out what actually becomes of Morgan’s plan to return to Virginia. Will he still want to go after the storm passes? Will he even still be alive? Will whatever happens during the hurricane make the others want to go with him?

Also Read: 'Fear the Walking Dead' Trailer: Nature Takes Over in the Second Half of Season 4 (Video)

One of the popular fan ideas since the crossover was first teased was “The Walking Dead” and “Fear the Waking Dead” won’t just continue to do crossovers, but will actually merge at some point, and this would certainly be a way to do that. Of course, “Fear” has been renewed for a fifth season by AMC so it doesn’t look like it will be folded into “The Walking Dead” in the near term, though they could end up running in parallel with characters crossing over between them more liberally, like in the Marvel Cinematic Universe of the CW’s Arrowverse.

The showrunners have been cryptic about it because they don’t want to give away what’s coming. Though the way overall “Walking Dead” overseer Scott Gimple answered a fan question at Comic-Con about potential future crossovers (“I would never tell you in this moment but I really want to”) makes us think that at minimum the two shows will continue to interact in some way.

For now, we’ll have to just wait and see, but the fact that Morgan is already bringing up the idea on the show of trekking with his new group of pals back to Virginia has our imaginations running wild for how this shared universe is finally starting to take shape.