Instantly recognizable by its meticulous attention to detail, vibrant color scheme and star-studded ensemble cast, a Wes Anderson film is simply like no other. “The French Dispatch” ticks off all of these boxes.

Set in the fictional French city of Ennui-sur-Blasé, “The French Dispatch” is a collection of stories from the final issue of an American magazine staffed by a colorful cast of expatriate journalists. A parade of Anderson regulars – Tilda Swinton, Bill Murray, Owen Wilson, Frances McDormand and Jason Schwartzman among them – and exciting newcomers – Timothée Chalamet, Léa Seydoux, the list goes on and on – play the characters in these stories and the writers who bring them to life.

Following COVID setbacks and a nine-minute standing ovation at Cannes Film Festival, the writer-director’s 10th feature film was finally released in theaters on Oct. 22, but are there other ways to watch the film?

Read below for how to catch “The French Dispatch” at home or at a movie theater near you.

Is “The French Dispatch” Streaming?

When Is “The French Dispatch” on VOD and Blu-ray?

“The French Dispatch” will be released on VOD to rent or buy on demand on Dec. 14. The film will then be released on Blu-ray and DVD on Dec. 28, although as of now the film is not getting a 4K physical release. 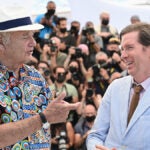 Are Wes Anderson’s Other Films Streaming?

Who Is in the Cast of “The French Dispatch”?

Also Read:
Wes Anderson’s ‘The French Dispatch’ Hailed as ‘Relentlessly Wonderful’ and as ‘Playful as They Come’
x