It should be no surprise that Wes Anderson’s latest film “The French Dispatch” — delayed when last year’s Cannes Film Festival was canceled — is as colorful, fun, hilarious, peculiar and all around Wes Andersonny as any of his films, critics say.

The early reviews of Anderson’s latest called the film “relentlessly wonderful” and as “playful as they come.” TheWrap’s Steve Pond has called it the “ultimate” Wes Anderson movie, packing more of his influences and sensibilities — not to mention nearly every cast member who has ever been in one of his movies — into one film.

“It’s an Anderson Sampler Pack, each candied treat more elaborately wrapped and intricately decorated than the last,” Pond wrote. “It’s fun and it’s impossibly stylish and it’s absolutely exhausting, and it might make you start musing about the law of diminishing returns. But boy, it sure looks pretty.”

“The French Dispatch” is an episodic film from Anderson, a collection of five stories within the film that flit back and forth from black and white to color, all of which are interconnected as the stories of a New Yorker-style magazine in France in the ’70s, with Bill Murray as its editor.

Critics described it as among Anderson’s most detail-oriented films, with impeccable, painterly shots throughout. One critic even said that the film could have also worked as a series of web shorts that he would have been glad to watch for hours on end.

“#TheFrenchDispatch is the most Wes Anderson movie to ever Wes Anderson. It packs about 10 different movies in just 2 hours, each segment crazier and more imaginative than the last. For a brief moment it goes animated like a Tin Tin comic strip and I almost cried,” critic Rafael Motamayor wrote on Twitter. 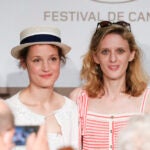 “The French Dispatch” from Searchlight Pictures will open in theaters on October 22. See more reactions to the film, as well as some Timothee Chalamet cuteness on the red carpet, below:

Also Read:
Cannes So Far: It’s All About the Testing – and the Sexy Nuns, of Course
x