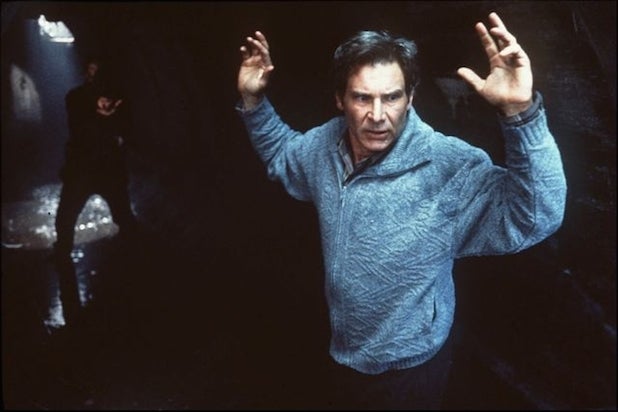 It has long been said that the true story behind “The Fugitive,” the Harrison Ford action classic that turns 25 years old today, is very loosely based on the ’50s murder case, conviction and acquittal of Sam Sheppard. Both Sheppard and Ford’s Richard Kimble were doctors, and both were wrongly accused of murdering their wives after an intruder broke into their home.

And the similarities end there.

The assailant Sheppard fought with was not a one-armed man, as in the film. It was said Sheppard’s motive was that he was having an affair, a detail not in the movie. Sheppard never escaped from prison, least of all from a moving, crashing train. And the real killer was never even found!

And yet this idea stretches all the way back to the popular TV show “The Fugitive” from the ’60s, even though the creators of the series have denied the connection.

“I suppose connecting Kimble to Sheppard makes a more sensational story,” Roy Huggins, creator of the original TV show told the LA Times back in 1993 shortly after the film remake’s release. “I wouldn’t care as much … except that’s not the way [‘The Fugitive’] happened. [The news reports] are in reckless disregard of the truth.”

Sheppard’s story was a widely publicized trial, something the Supreme Court labeled a “carnival atmosphere.” And the media was accused of swaying the public opinion on the case, resulting in Sheppard’s conviction. He  was imprisoned for 10 years before being acquitted at a retrial.

Also Read: 'Holes' Author Louis Sachar on How Important It Was That Film Didn't End Up 'Soft, Fluffy'

But the popularity of the show and the film have continued to fuel public opinion on the case. Sam Reese Sheppard, Dr. Sheppard’s son, had his father’s body exhumed in 1997 to gather more evidence and clear his father’s name, and even led the charge in getting Sheppard’s case brought back to trial in 2000.

In fact, even Sheppard’s retrial lawyer, F. Lee Bailey, told the LA Times that Sheppard and “The Fugitive” are forever tied.

“There was never any doubt when Dr. Richard Kimble was running around on TV, he was inspired by the Sheppard case,” Bailey said. “In 1965, no one would have dared argued the point.”