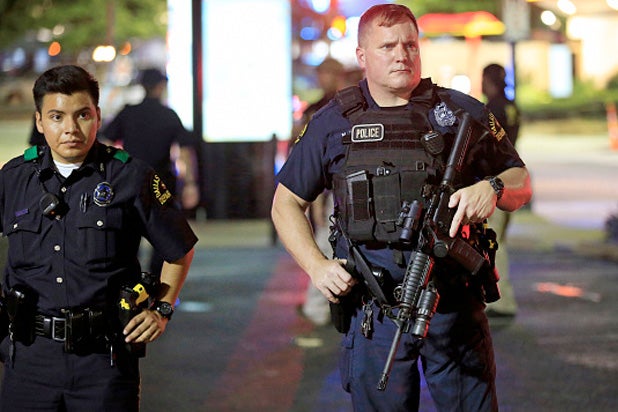 Is this war? That was my first thought upon leaving a screening of “Ghostbusters” and learning that four — oh wait, horrors, it’s now five — police officers had been shot dead by snipers at a Dallas rally against police shootings in other cities.

Snipers aiming at police officers, killing five, wounding another six officers and one civilian. One of the snipers got into a shootout with SWAT officers.

Dallas police said they had three in custody besides the guy in the shootout — “adding that the fourth individual has told negotiators he hopes to hurt more cops.” This is starting to get scary.

It’s a tragedy begotten by tragedy. But is it really so unexpected? The Dallas rally was to protest the shooting deaths of two African-Americans this week, both highly disturbing and both caught on video.

After the image of two cops atop Alton Sterling in Baton Rouge went viral, the killing in Minnesota of Philando Castile left many of us breathless, filled with sorrow and rage, especially as we watched his girlfriend record the unfolding events on Facebook Live.

As a country, we know by now there is a problem. The answer, of course, is not shooting at the police. No one wants more innocent lives to be lost. The fallen officers in Dallas have nothing to do with what happened in Minnesota and Baton Rouge. Yet it seems they paid the ultimate price.

Here is where we need to get real: Violence begets violence. Unrequited rage and pain will find its response eventually. If justice does not prevail, rough justice takes its place — the justice of the vigilante, and of the mob. People wonder what else is left when innocent people continue to die in a country where guns proliferate unabated and where police shootings continue despite #BlackLivesMatter, the protests of our African-American president and the increasing use of body cameras by authorities?

Are we powerless to change this status quo we despise? I certainly hope this is not war. The comments of conservative talk show Joe Walsh host saying so — he deleted the tweet — are not helpful. Walsh blamed Obama for the violence against police.

The image of the man who turned himself in to police in Dallas is a young African-American with rippling muscles and a camouflage t-shirt. Update: He has now been cleared of any involvement in the shootings. There was a time in America, when black radicals took up arms to fight white oppression. To the Black Panthers, the police were the enemy — “pigs,” they were called.

Today, it is no great leap for some to think that the police are the enemy.

Of course violence is not the answer. But on Thursday night, we were shaken by a terrible alarm of what may lie ahead.