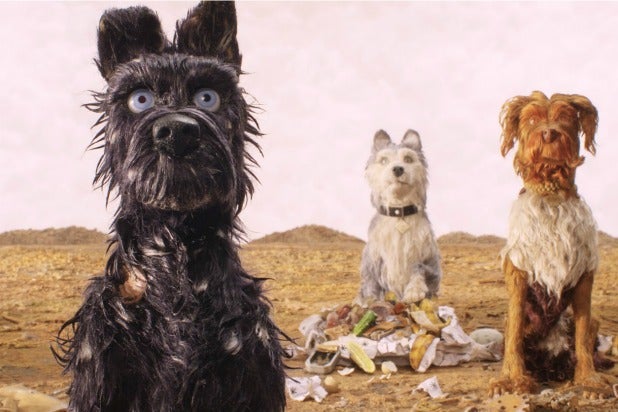 On a quiet weekend for the indie box office, Fox Searchlight’s “Isle of Dogs” held on to its spot in the top 10 in its second weekend in wide release. The Wes Anderson film expanded again to 1,947 screens and made $3.4 million, bringing its total to $24.3 million.

That puts “Isle of Dogs” on the verge of passing the inflation-adjusted domestic total of Wes Anderson’s previous stop-motion animated film, “The Fantastic Mr. Fox,” which made $21 million in 2009. With inflation taken into account, that amount grows to $25.2 million. Globally, “Isle of Dogs” currently has a total of $39.6 million.

Elsewhere, the top per screen average (PSA) of the weekend belongs to IFC’s “Ghost Stories,” which opened on a single screen in New York and made $12,563. The anthology horror film stars Andy Nyman — who co-directed and wrote the film with Jeremy Dyson — as a professor known for debunking supernatural myths. But his skepticism is put to the test when he encounters three people with horror stories that might be more than they seem. Martin Freeman, Paul Whitehouse and Alex Lawther also star.

Also entering this weekend is Indian film “Bharat Ane Nenu,” which was released on 302 screens by Great India Films and made $2.66 million. That amounts to an estimated per screen average of $8,811. In India, the political thriller from director Koratala Siva has earned the second highest opening weekend for any Telugu-language film, just  behind last year’s record-breaking blockbuster “Baahubali 2.”

Sitting just behind “Bharat” on the PSA rankings for the weekend is Sony Pictures Classics’ “The Rider,” which expanded modestly to nine screens and added $78,433 in its second weekend. That pushes the film’s total to $142,768 and gives it a per screen average this weekend of $8,715.

Amazon expanded the acclaimed Cannes thriller “You Were Never Really Here” to 183 screens, making $551,745 and pushing the film’s total past $1.2 million with a per screen average for the weekend of $3,085. Bleecker Street’s “Beirut” added $1 million from 755 screens, giving it a 10-day domestic total of $3.9 million.