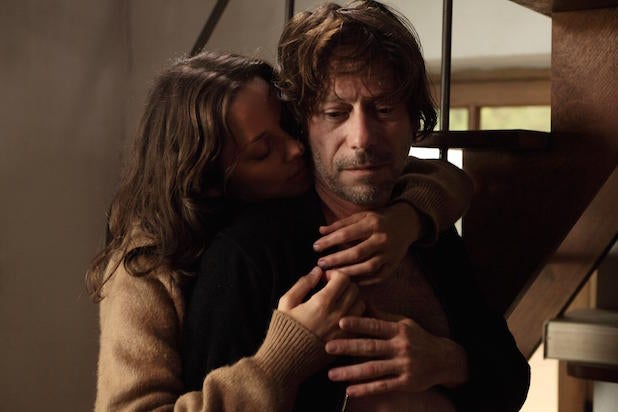 Take one part Fellini’s “8 ½,” one part Almodovar’s “Volver”, stir them together with a strong, steady dose of nervy French idiosyncrasy, and what do you get? Well, it wouldn’t be something terribly different from “Ishmael’s Ghosts,” which opens the 70th Cannes Film Festival on Wednesday. In his 10th feature film, Gallic auteur Arnaud Desplechin once again mines some of his enduring obsessions, offering a tale of a beleaguered film director haunted by his past, present, and future.

Mixing story elements from other touchstone films and funneling them through his unique style, Desplechin has delivered a familiar if agreeable valentine to the medium itself; when picking an opening film, Cannes couldn’t have made a more fitting choice.

You can call Mathieu Amalric Ishmael. He plays a middle-age filmmaker putting together his latest espionage thriller while living in contented coupledom with girlfriend Sylvia (Charlotte Gainsbourg). But both his personal and professional lives get thrown for a loop when his wife, missing for over 20 years and declared dead for the last eight of them, suddenly returns. That would be Carlotta (Marion Cotillard) — and as the title makes clear, she’s but one of the many ghosts haunting the director.

Those ghosts are more figurative than literal. Carlotta isn’t actually from the spectral plane and Desplechin isn’t looking to make “The Sixth Sense.” He is, however, eager to cut across different genres, giving considerable screen time to the film within a film, the spy thriller that Ishmael should otherwise be making.

That narrative strand, which casts heartthrob Louis Garrel as an improbable globetrotter, never quite fits with the larger A-story, if only because the Cotillard-Amalric-Gainsbourg love triangle is supposed to prevent the main character from working, but his movie just keeps on apace. And then even the larger A-story peters out, as the register shifts from emotional melodrama to story of a director in creative crisis.

Of course, no one looks to Arnaud Desplechin for rigorous narrative strictures. His work has always been defined by its looseness, by its ramshackle assembly of old-time film techniques, clipped pace, and intellectual digressions. His best films have marshaled that singular style — which can best be described as “over-caffeinated intellectual” — to serve their larger themes. In “A Christmas Tale,” that buzzy energy underscored family dysfunction, whereas in “My Golden Days” it gave voice to the restless hunger of youth.

In that sense, “Ishmael’s Ghosts” was never going to be one of the director’s most satisfying works, as it’s fundamentally about midlife rut. Without the thrill of the beginning or the catharsis of the end, the film spends a lot of energy on just grinding it out, spinning its wheels, and trying a number of genres on for size without any larger theme.

And yet, what keeps it from greatness makes it a great opening film. Though it ultimately feels more like an exercise than a statement, it’s an exercise made with impeccable taste, and its genre dalliances only whet the appetite for more.

As anyone who’s ever settled in for a long meal knows, you never want the amuse-bouche to overwhelm main course. Cannes 2017 is officially opened. Dinner is served. Let’s eat.