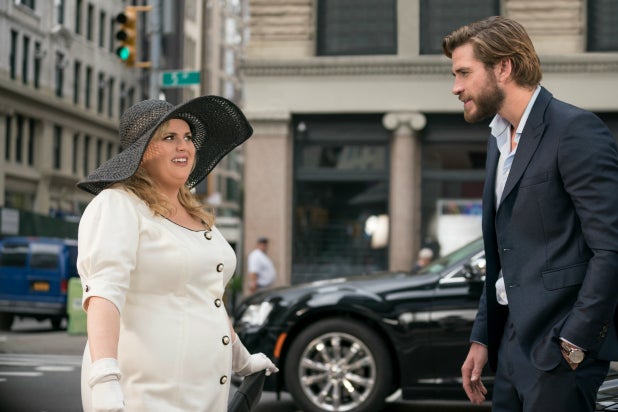 Satirizing a genre as you’re fully embracing it isn’t the easiest feat and is perhaps impossible. It’s true that every good satire is also in some way a love letter to its source material, but love it a little too much, and the Valentine’s card becomes onion-thin with the prim bite of a paper cut. Todd Strauss-Schulson’s rom-com sendup “Isn’t It Romantic” is one of those satires that wants to have its Valentine’s chocolates and eat them too.

This story, about a woman who hits her head and is thrown into a rom-com world of cliché and improbability, may abide by the rules of the genre too closely to function as a critique, and it’s a shame, because it’s almost there. Writers Erin Cardillo, Dana Fox (“How to Be Single”) and Katie Silberman (“Set It Up”) hold back from really making a statement, opting instead to adhere to a tried-and-true format.

After Amy Schumer’s woman-hits-her-head-and-believes-she’s-beautiful “self-empowerment” narrative in “I Feel Pretty,” there really couldn’t have been a better time for a parodical version of the story. There’s also the fact that rom-coms have been in high demand as of late, which makes a cautionary reminder of the genre’s shortcomings very pertinent. Here, Australian comic actor Rebel Wilson plays Natalie, a New York architect whose main job is getting coffee, designing parking garages, and generally getting grief from her boss and colleagues. “Architect” is absolutely the kind of job a character in a rom-com would have, and it would be the dummy version that doesn’t take into account that most architects are just doing the grunt work of building. Natalie’s the slightly more realistic version, albeit apparently living in a time where architects are still hand-drafting construction plans.

When Natalie’s best friend and assistant Whitney (Betty Gilpin, “GLOW”) tries to get Natalie to recognize the value of romantic comedies, Natalie’s ready with a long list of gripes — the protagonist is always adorably tripping on things, there’s always a slow-motion scene of someone running to break up a wedding — and these will (obviously) act as the blueprint for Natalie’s journey through rom-com world when she eventually hits her head. This is the first sign the film will be more formula than critique.

Rom-com world is bright and airy and pretty. Production designer Sharon Seymour (“Argo”) seems to have studied every open floor-plan of every Nancy Meyers home and office and faithfully recreated them, but, honestly, she could have gone a little further. The humor in her designs relies upon one knowing the cliché of rom-com characters somehow always working in giant, marble-floored offices with glass-enclosed conference rooms. It’s easy not even to notice the visual gag, because we’ve been trained for so long to see it as normal. And this critique of just not going far enough can be translated to other areas of the film.

Leah Katznelson’s costuming, which is also pitch-perfectly attuned to the rom-com world, consists of some very finely tailored garments to glamorously flatter Wilson. But there’s also a missed opportunity there for some visual gags, which I don’t blame on either Seymour or Katznelson but rather on director Strauss-Schulson (“The Final Girls”), who’s playing it safe, seemingly trying not to alienate the hardcore rom-com fans. David Wain’s “They Came Together” already proved you can have a sweet romance with extremely silly comedy, though.

The best gag comes from rom-com world’s cloying PG-13-ness. Natalie goes on a date with the debonair Blake (Liam Hemsworth), who whisks her away to dinner on his yacht before heading back to Natalie’s apartment. Natalie’s decided she’s gonna roll with the rom-com thing because at least she can get laid by a handsome man. Unfortunately, the world won’t let her partake in the actual act, as both the film and Natalie’s life hard-cut to the morning after. That’s a smart jab at the prudishness of movie romances.

Occasionally, the subtle gags are enough to elicit a chuckle. Music supervisor Maggie Phillips seems to have mined through every aughts rom-com music catalogue to find exactly the song that’s been used more than 15 times in a CW soap opera. In one throwaway establishing drone shot that soars over a bridge to depict the bustling city of New York, Vanessa Carlton’s “A Thousand Miles” plays, and it’s easy to imagine Strauss-Schulson and Phillips getting a dark kick out of recreating such a ubiquitous and banal pairing of American cinematic scene and music.

Still, neither the romantic nor the comedy portions of this movie are firing on all cylinders. Strauss-Schulson falls back on the technique of shooting “loving glances” to relay the developing love between Natalie and co-worker Josh (Adam Devine). And he uses them in both the realistic section and the fantasy satirical sections of the film, so it doesn’t seem to be a critical statement on them.

Very rarely have I wished for more improvisation from a comic film, but this is one of those times; perhaps that could have revealed some chemistry between Wilson and Devine, who are generally hilarious performers. The one person who seems to be giving it their all every frame is Hemsworth, who hams it up as the charming Mr. Wrong. If Gilpin had more than a couple scenes, she likely would have been a more formidable presence as well, but that’s not saying a lot when the leads have the least interesting dialogue.