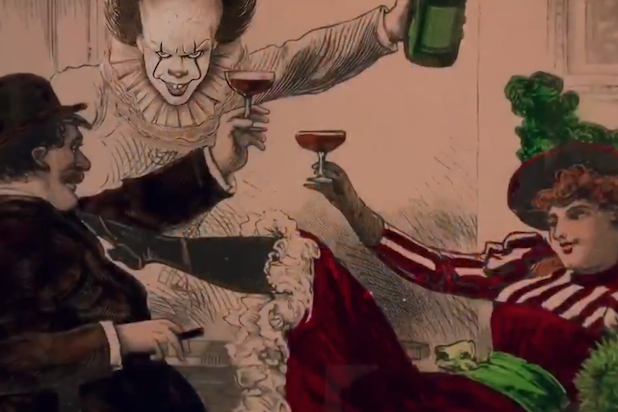 If you’ve seen “It” or the trailer for its upcoming sequel, you know that Pennywise loves to scare its targets by appearing in photos and even TV shows. And that led one fan to come up with the idea of the infamous clown invading one of the most famous TV intros of all time: “Cheers.”

This weekend, writer Jesse McLaren posted a video on Twitter of the famed opening credits where “everybody knows your name,” but slipped Pennywise’s grinning visage among the old photos and drawings of cavorting tavern revelers. Early on, you can see a picture of the clown without his makeup from the “It: Chapter Two” trailer, while another photo shows Pennywise as played in 1990 by Tim Curry.

Anyway- Here’s the opening to Cheers but with Pennywise the Clown hidden in every photograph. pic.twitter.com/FjCrv2PJCg

This isn’t the first time that McLaren has played with Pennywise. Two years ago, he pulled a prank on his sister by sneaking Pennywise into all her engagement photos. A day later, he said that his sister immediately noticed the clown and said she was going to use the photos anyway for her wedding invitations.

When Pennywise is done haunting Boston, he will return to Maine to terrorize the Losers Club once again in “It: Chapter Two,” which will be released by Warner Bros. on Sept. 6.