We are complicated. We are the best of people and, moments later, the worst. Can we ever calculate our full moral totality? Can we ever draw up a satisfying ledger balance of ourselves — or anyone else?

And what if that “anyone else” happens to be the most eccentric, compelling pop figure of our time? 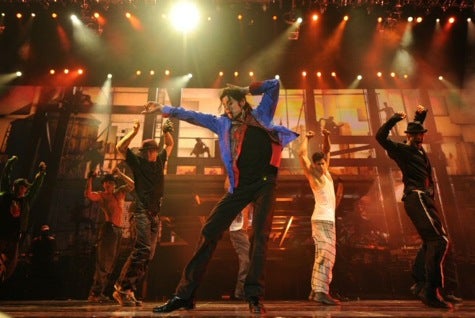 I speak of The Gloved One. The Man in the Mirror. Prince Moonwalk. The ethereal figure with the ski-jump nose, the Fletcher Christian hair, the painted-on shades, the Sgt. Pepper jacket — and ownership of the Beatles catalog to match.

“This is the final curtain call,” says the late pop star, at the beginning of “This Is It,” a making-of movie and a taking-leave movie all rolled into one. It’s March 2009. And he’s announcing the forthcoming “This Is It” tour, starting at London’s O2 Arena.

As we watch this hagiographic record of his rehearsals leading up to that tour, we note — we can’t help ourselves — that he has already made $90 million in posthumous royalties and assorted rights, according to a Forbes list. That list places Jackson third on the all-time dead celebrities’ money-making list. He’s third to Yves Saint Laurent and Rodgers & Hammerstein. But he’s ahead of fourth-placed Elvis.

And we also reflect on the dissonance that underscored his life. Even Jackson’s staunchest fans surely admit their revered Michael was never far from controversy. His life was a disconcerting blend of major and minor chords. For every thrilling, percussively stirring single, and for every exciting gyration of his fluid body, there was a groan-inducing negative detail to endure.

There was Nice Michael: The snub-nosed kid at the head of the Jackson 5 (“When I had you to myself…”). The lithe genius who gave us “Thriller” — only the most successful album of all time. The sensational performer who electrified everyone at the 25th anniversary of Motown. The co-writer of “We Are the World.”

But then there was Tabloid Michael, a mixture of fact and fabrication. What was true? After a while, we accepted the worst allegations because it all seemed to fit. The allegations of sexual abuse of teenagers ended with no charges (for the first case in 1993) and acquittal (for the second one in 2005). The alleged abuse from his father.

His changing face — bleached or suffering from vitiligo? The hyperbaric oxygen chamber designed to slow his aging. He denied it on "Oprah" in 1993, as well as bleaching his skin. He also denied buying the bones of the Elephant Man. But we all saw him dangling the baby over the hotel railing four stories up.

We say goodbye to both Michaels, now. We take all that weird but mostly sad baggage. And we dump it. We don’t think about the cardiac arrest, the reports of propofol, lorazepam and midazolam (he went from creating chemistry to becoming it), and charges of homicide.

We dump it all, because death asks our forbearance. Death forces us to say goodbye to what was good. Watching Jackson in rehearsal, it’s hardly a stretch. To watch him in this movie is to see — and yet never quite fully capture, and that’s the mystique of it — what all the fuss has always been about.

Just watch the shoes. I did that for a while. The way the heel rises like a metronome. The way those feet squiggle so that he seems to ice skate everywhere. Then try to watch the wave that goes from his flicking fingers through the hips, along the legs and back to those shoes again.

You’ll never get it. It’s ineffable, what he does. What he did. There’s a reason he’s up there and we’re all down here.

It’s saddening and touching to see him so completely at home in such a public place. You realize he only ever had one home: the stage. His real homes, like Neverland, they were the nightmares. So it’s oddly comforting to see him caught in time, still seemingly alive, as he works tirelessly to perfect those steps. As he leaves such a powerful effect on the dancers, choreographers, musicians and other support people around him.

The applause they give him is spontaneous and full-hearted. And amid this warm bath of appreciation, it’s easy to celebrate the pure joy at the heart of this little boy, this 50-year-old boy, forever moon walking in the skies outside Wendy Darling’s bedroom window.