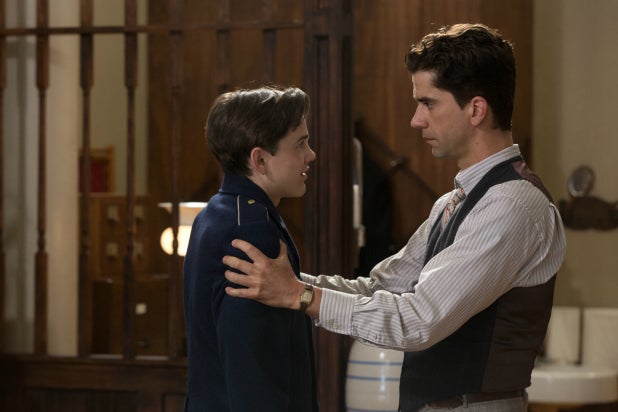 Meg Ryan‘s choice of literary adaptation for her directorial debut may have been too ambitious: The overall effect, while earnest, is disjointed, dreary and oddly structured. Seemingly pointless scenes drag. The characters feel like cardboard cutouts, and the story is so deliberately paced as to feel tedious.

One of the few positive things that can be said about this clunky World War II coming-of-age drama is that the folky score, by John Mellencamp, has a low-key appeal.

There’s plenty of pontificating about the evils of war, the joys of home and about what it takes to be a man, but none of it rings authentic. The story centers on Homer Macauley (Alex Neustaedter, “Colony”) who, at 14, is compelled to learn far too much about the sadness of life. He takes a job as a telegram delivery boy, and much of what he delivers are tragic missives from the battlefront telling families their sons and brothers have been killed.

In fact, Homer’s first delivery is to a woman who doesn’t speak much English, but insists he come in and have some sweets. “All boys love candy very much,” she insists. Much of the dialogue — a lot of it in voiceover narration — feels similarly clunky, with equally awkward transitions between scenes.

Shortly after its publication, Saroyan’s novel was made into a warm-hearted film starring Mickey Rooney, and remade again for television in 1959. It was also adapted into a Broadway musical in 1984, and revived in 2006. Here, screenwriter Eric Jendresen (“Killing Lincoln”) has fashioned artificial-sounding dialogue and dialed back on the earlier film’s sweet sense of innocence lost. Performances by Rooney and Frank Morgan felt more sincere and touching than anything we get in Ryan’s remake.

Homer’s mother is played by Ryan; wearing the same expression throughout, she utters only about four sentences during the entire movie. Homer’s deceased father is played, in what amounts to a ghostly cameo, by Tom Hanks, and a scene between Ryan and Hanks, intended perhaps as a spectral image, or an imaginative reverie or possibly a vivid memory, falls flat.

The sense of dreaminess Ryan goes for in scenes like this jar with the more concrete realities of this coming-of-age tale. And despite all their chemistry in films like “Sleepless in Seattle,” Hanks and Ryan seem disconnected here, eyeing each other blankly in what is intended as a meaningful look. Neither the couple’s affection nor any sense of their relationship comes across to viewers.

Other co-stars are equally lackluster. Homer’s boss Tom Grogan is played by a too-jaunty Hamish Linklater, and a wryly comic Sam Shepard dispenses terse wisdom to Homer as the crusty Willie Grogan, an aging, and often inebriated, telegraph operator.

The voiceover narration is supplied by Homer’s soldier brother, Marcus (Jack Quaid, the son of director Ryan and Dennis Quaid). His character is mostly reduced to some sermonizing paragraphs in letters home. “I have no idea what’s ahead, but whatever it is, I’m humbly ready for it.”

Such platitudes do nothing to flesh out the characters or the arc of the story. Nor do they make up for stylistic misfires. Ryan relies too heavily on scenes of neighborhood children playing, looking like stand-ins for “Our Gang,” to convey the contours of a classic American town.

One of those kids is Homer’s adventurous little brother Ulysses (Spencer Howell) who’s one of those adorable, movie-precocious tykes. He’s a natural charmer. Scenes focusing on him are a welcome respite from the dreary, though they don’t serve much purpose except to highlight his youth, and the fact that his mother allows him to run around town at all hours.

Generally, scenes don’t flow smoothly, and the pacing and rhythm suffers. It feels like key swaths have been edited out. The ending comes abruptly and awkwardly.

Ryan seems most ill-at-ease directing herself. It seems as if she wants to disappear into the wallpaper in every scene she’s in. Her expression never changes, and the few words she utters are bland pronouncements, like “Everything’s alright.” We’re meant to believe she’s worried about her son having gone to war and that she misses her dead husband. She finds her youngest son mildly amusing, but doesn’t seem engaged in much of anything.

It’s not that mothers like this don’t exist, but Ryan doesn’t make this particular maternal character at all convincing. Is she meant to be depressed? Or is her character just lacking dimension? Ryan’s blend of dreamy sequences juxtaposed with harsh reality feels tonally jarring and stilted.

There’s a hazy, gauzy look to “Ithaca,” but it feels less like a nostalgic perspective than an attempt to obscure the film’s muddled tendencies.