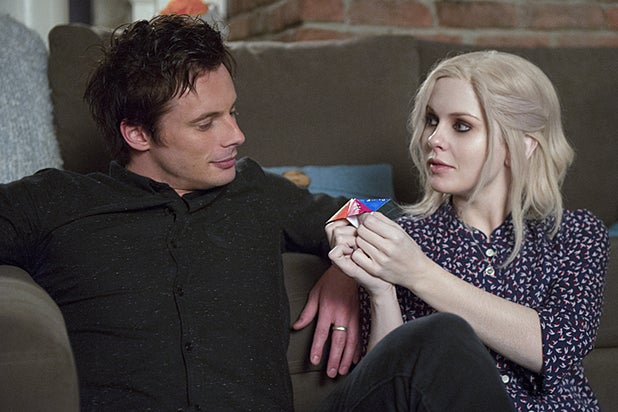 “iZombie’s” comely undead lead Liv finally found herself a beau she can really be with. But almost immediately, he shows signs that he may not be everything he seems.

Lowell, the rocker zombie with dyed jet-black hair played by Bradley James, seemed perfect for Liv (Rose McIver), in no small part because he understands that freaky thing that happens wherein eating someone’s brain turns you into that person for a while.

But as revealed in last week’s episode of The CW show, Lowell may not be as perfect as he seems. As Liv did the walk of shame from her new boyfriend’s place the morning after, she saw none other than the villainous Blaine (David Anders) making his way into the building, holding a signature cooler, which can contain only one thing: human brains, sourced very much unethically.

According to James, being in business with Blaine is not necessarily a sign that Lowell is a bad guy too.

“As far as Liv is concerned, she’s in a very privileged position because she works in a morgue. She gets brains all the time,” James told TheWrap. “It’s maybe not as black-and-white as that for everybody else in terms of how the zombies go about feeding themselves.”

Below, James also reveals where he thinks Lowell stands on the idea of a zombieness cure, how the Lowell-Blaine connection will shake out, and whether he might return for Season 2.

“iZombie” was just renewed, so obvious first question: Will we see Lowell back on Season 2?
Obvious answer: I believe that’s a question for Rob Thomas. He’s the man who makes these decisions. Lowell’s future is in his hands.

Liv is dying for a cure to make her human again. Where does Lowell stand on that? He seems relatively less angsty than she does about being a zombie.
Yeah, he’s quite a light-hearted bloke, really. Relatively light. He’s not become a caped crusader, not solving murders and stuff — he’s still finding his feet. But I daresay he would love the opportunity to un-zombiefy himself, if at the very least it means he can go play live gigs again. So I think he’d be pro-cure.

Is it the zombie thing that makes Liv and Lowell so compatible or would they have connected as humans?
The zombie thing’s drawn them together. In normal circumstances they wouldn’t necessarily find themselves in the same circles. But … I don’t think they would be getting on as well as they do if there wasn’t something there. So I don’t think it’s just a zombie flash that they’re currently in possession of.

Now we find out Lowell actually has some secrets of his own. How much of what we’ve seen so far has been genuine?
I don’t necessarily think any of it has been disingenuous. But at the same time, obviously, he’s got some secrets. As far as Liv is concerned, she’s in a very privileged position because she works in a morgue. She gets brains all the time. It’s maybe not as black-and-white as that for everybody else in terms of how other zombies go about feeding themselves. At least it shouldn’t be, in people’s minds, as they watch the show.

What exactly is his deal with Blaine, how deep is he involved in that world?
We’ve just been introduced to the Lowell-Blaine connection. There aren’t that many zombies walking around, so I think there was always going to be some link. What I’ll say is I’ve had the wonderful opportunity to work with Mr. Anders and what fun it was too. So yeah, there’s certainly a development in that relationship.