Latin singer J Balvin has apologized and taken down the music video for his song “Perra” after receiving backlash for its portrayal of Black women. The video, which was released in September and then removed from YouTube on Oct. 17, showed Black actors in prosthetics that made them look like dogs. Balvin was shown walking two of the Black women on leashes, and there were also Black dancers in cages.

“I want to say sorry to whomever felt offended, especially to the Black community,” Balvin said in an Instagram Live video on Sunday. “That’s not who I am. I’m about tolerance, love and inclusivity.”

“I also like to support new artists, in this case Tokischa, a woman who supports her people, her community and also empowers women,” he continued. “As a form of respect, I removed the video eight days ago. But because the criticism continued, I’m here making a statement. Mom, I’m sorry too. Life gets better each day. Thank you for listening to me.”

Balvin’s mother and Marta Lucía Ramírez, the vice president of the singer’s native Colombia, were among those who voiced their disappointment over the video’s imagery. In an open letter published Oct. 11., Ramírez called the video “sexist, racist, chauvinist and misogynistic.”

“When I found out [about “Perra”], I called him … [and asked], ‘Where is the Josésito that I know?’” Balvin’s mother told Colombian news station Cosmovisión. “That song is not … I don’t even know what to say. I did not see my José anywhere.” 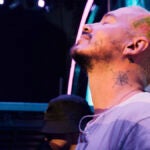 Dominican rapper Tokischa, who collaborated with Balvin on the song, also apologized for the video in an interview with Rolling Stone and attempted to shed light on the creative vision behind the video.

“It was very conceptual. If you, as a creative, have a song that’s talking about dogs, you’re going to create that world,” she said. “I understand the interpretation people had and I’m truly sorry that people felt offended. But at the same time, art is expression. It’s creating a world.”

Raymi Paulus, who is Tokischa’s manager and the director of the video, added that they intended for the video to be satirical, using the “many contexts of the word ‘perra,’” which translates to “female dog” or “bitch” in English.

“Our creative process never aimed to promote racism or misogyny,” he said. “The Dominican Republic is a country where most of the population is black and our blackness is predominant in underground scenes, where the filming took place, and which was the subject of the video’s inspiration. ‘Perra’ was a video filmed in the neighbourhood, with people from the neighbourhood, and the use of people of colour in Perra was nothing more than the participation of our people in it.”