In the music documentary “The Boy From Medellín,” Colombian reggaeton superstar J Balvin is prepping for a massive concert in his hometown of Medellín — a show that will host up to 45,000 people — only for protests to break out in the city’s streets.

The documentary depicts the anxiety and depression that have plagued Balvin for years whenever he’s offstage, but the new decision of whether to amplify the voices of young people protesting and being persecuted by the government leaves him torn about how to use his platform.

“If you speak up, it’s wrong. If you don’t, it’s wrong. So either way, you lose,” a confidant says to him in the trailer. “I don’t want to get into political things because it’s not my thing. I just want to focus on bringing light into the world,” Balvin replies. 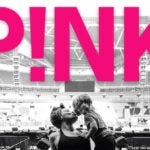 It’s fitting that “Cartel Land” and “City of Ghosts” director Matthew Heineman is helming “The Boy From Medellín,” as he’s suited to capture not just the excitement of Balvin’s performance but also the political drama on the streets. Heineman shot the film entirely in the week leading up to the Medellín concert and, in the process, was given rare access to J Balvin, known by the world as “Reggaeton’s Global Ambassador.”

Amazon Studios acquired the film out of Toronto and will release it globally on May 7. Check out the trailer here and above.