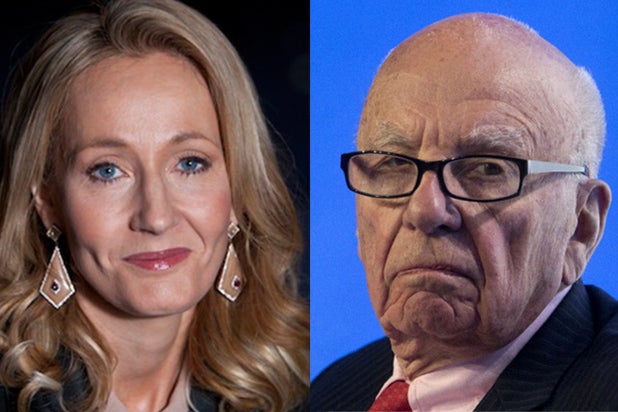 J.K. Rowling, author of the Harry Potter books, on Sunday took exception to Rupert Murdoch’s tweets that said even peaceful Muslims must bear some responsibility for the terror attacks in Paris that left 17 dead.

“I was born Christian. If that makes Rupert Murdoch my responsibility, I’ll auto-excommunicate,” the British author tweeted Sunday.

Her response came after the News Corp chief executive, who regularly uses his Twitter account to make his feelings known, suggested the violence in Paris is the responsibility of all Muslims.

Maybe most Moslems peaceful, but until they recognize and destroy their growing jihadist cancer they must be held responsible.

Big jihadist danger looming everywhere from Philippines to Africa to Europe to US. Political correctness makes for denial and hypocrisy.

On Sunday, world leaders joined 3.7 million marchers in a Paris “unity rally” to show solidarity in the wake of the terror attacks. Brothers Said Kouachi, 34, and Cherif Kouachi, 32, along with 18-year-old accomplice Hamyd Mourad attacked the office of satirical magazine Charlie Hebdo on Wednesday, killing 12, including journalists, cartoonists, and police. The violence was in response to the outlet publishing images mocking the Prophet Muhammad.

On Thursday, a terrorist tied with the Charlie Hebdo attackers killed a female police officer in a Paris suburb. And on Friday, two separate hostage standoffs unfolded. Four people were killed at a kosher grocery store when Amedy Coulibaly opened fire inside the market. A hostage being held by the Kouachi brothers survived.

The unabashed Murdoch usually sticks to business or political issues, but has recently tweeted about buying a vineyard, banning topless pictures from his newspaper, obese women and criticism of the 20th Century Fox film “Exodus.”

In subsequent tweets Sunday, Rowling cited a recent study suggesting that eight times as many Muslims as non-Muslims had died in terrorist attacks. And she praised “the courage and compassionate actions” of Lassana Bathily, the Muslim kosher supermarket worker who hid Jewish customers from the gunman in the siege by leading them to a basement.

His actions, she wrote, “remind us of what ‘humanity’ ought to mean.”

In a similar spirit, Murdoch took to Twitter on Sunday to praise the massive solidarity rally.

“Extraordinary scenes in Paris today, but do not forget the heroic sacrifice of Ahmed Merabet, Muslim police officer whose funeral was today,” he tweeted.