The always endearing Jack Black was main guest on the final episode ever of Conan O’Brien’s TBS talk show. and from the sound of things, he had something amazing planned to send “Conan” off with a bang. Unfortunately, he took a planned gag where he was supposed to pretend to be injured a bit too far and ended up actually getting injured for real. Ouch (literally).

So for context, Black came out on stage during Thursday night’s series finale wearing a cast on his foot and using a cane — and visibly wincing as he hobbled over to his seat. After some chit-chat where Black explained how much he’s always appreciated and respected Conan, who was one of the first people to have him as a guest on a late-night show decades ago, Conan got Black to explain what was up.

It turns out the due had a big concept planned for O’Brien’s final show. “We came up with this musical number that was gonna involve a lot of like, physicality, and I was gonna get injured in the middle of the musical” — “Fake an injury,” O’Brien interjected — “Fake an injury,” Black continued. “And then the paramedics were gonna come in, take me on a gurney out to the ambulance.” 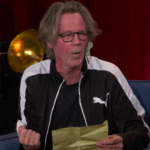 At that point, Black said, he was supposed to scream, “Hell no, I love Conan too much” and rip off his medical accoutrements and run back to the theater where they’ve been taping the show. The gag was so developed they were actually in the process of filming it on Wednesday, and did multiple takes. And during one of those takes, while running, Black twisted his ankle.

Conan then explained how he ran out to help and tried to get the EMT workers in the ambulance they had for the shoot to help, only to be repeatedly reminded that the EMTs were actors and the ambulance wasn’t a real ambulance.

“I was so bummed because I wanted to be the best guest of all time for your final show and instead, I am literally the lamest,” Black added, causing O’Brien to crack up.

“To me, and I’m sorry you got hurt, and I know you’re gonna get better soon, I felt so terrible when you fell, but also, I have to say, it felt fitting, for our show,” Conan said about the whole thing. “Here we are, when Carson and Letterman and all these legends go off the air, everything is meticulous. Of course we would think of a bit with Jack, where Jack pretends to get hurt, and while shooting it, Jack gets hurt. We’re the only show that would ever” do that, Conan joked.

“Johnny would have had Jack shot,” Andy Richter added.

Luckily, Jack Black still had it in him to rock out, and still limping, got up to sing a Sid Vicious inspired parody of “My Way” that paid tribute to O’Brien.