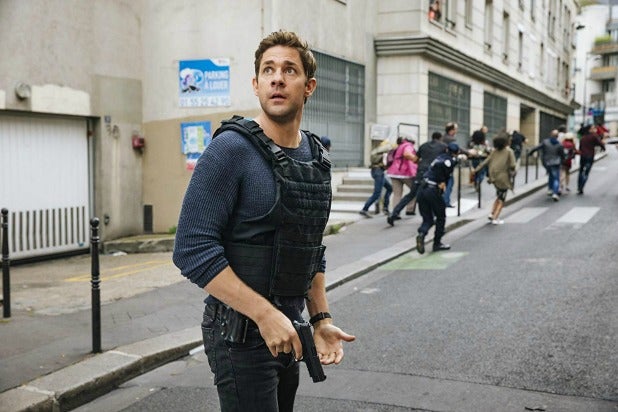 There’s a particularly, hmm, “interesting” bit in the midsection of Amazon’s new “Jack Ryan” series in which Suleiman (Ali Suliman) — the main villain in Syria — uses the chat feature in an online video game to communicate secretly with his brother (Haaz Sleiman) in France. Later, Jack Ryan (John Krasinski) tries to use the same game to trick Suleiman into revealing his dastardly plans by pretending to be that same brother.

So this video game — which is not a real game, for the record, and was clearly created for the show — plays an important part of the story “Jack Ryan” tells. If you’re wondering whether that is actually a thing that terrorists do in the real world — using video games to communicate and coordinate — well, the answer is probably not.

If you’ve been hanging around on the internet for a while, you might think you’ve heard about Islamic terrorists using “World of Warcraft” or private messaging on PlayStation 4 to set stuff up. But, in fact, there is no publicly available evidence that terrorists have used video games as a way to secretly communicate.

But there are two reasons you might think they have. The first is that among the many documents leaked by Edward Snowden back in 2013 was a report about the NSA, CIA and other agencies setting up counter-terrorism surveillance teams inside “World of Warcraft” and “Second Life,” among other online games. But the key bit of information in those documents was that they never accomplished anything with those teams.

The second reason is an erroneous report after the 2015 terrorist attacks in Paris that linked the attackers to the use of a PlayStation 4 system. The report featured a cavalcade of mistakes, most notably that it misconstrued a statement made by the Belgian interior minister three days before those attacks. In that statement, he claimed that terrorists love the PS4 because it’s more secure than WhatsApp, which is not actually true — as being about the attacks themselves, since the attackers lived in Belgium. It was also reported that a PS4 was found in the apartment of one of the attackers, which, as far as anyone can tell, was a made-up detail.

So, it appears that “Jack Ryan” is playing on a bit of internet myth when it comes to this alleged ripped-from-the-headlines detail.