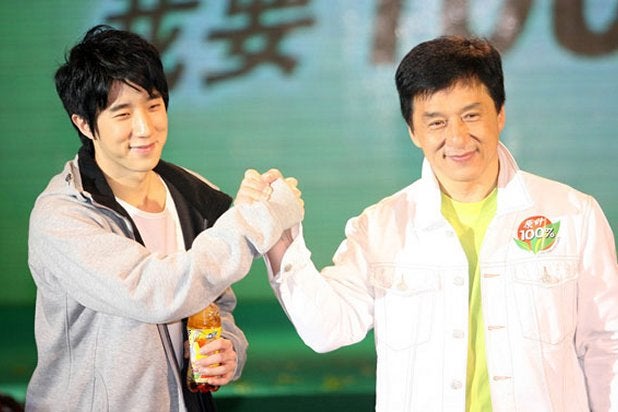 Jackie Chan‘s son, Jaycee Chan, was detained in Beijing, China on drug-related charges. The actor was apprehended with Kai Ko, a Taiwanese actor, for possession and use of marijuana.

Police reported Tuesday on their microblog that the two had been arrested this past Thursday, according to the AP.

According to authorities, both actors tested positive for marijuana and 100 grams of marijuana was confiscated from 31-year-old Jaycee Chan’s house. He is facing charges of accommodating drug users, with a maximum sentence of three years in prison.

Making these detentions even more publicly awkward, Jaycee Chan’s father, Jackie Chan was named an anti-drug ambassador in 2009, while 23-year-old Ko was on television as part of an anti-drug campaign in 2012.

The detentions follow increased crackdowns on drug offenders in China after President Xi Jinping declared in June that illegal drugs should be eradicated, and offenders severely punished. More than 7,800 people have been caught so far, according to the police, with several coming from China’s entertainment community.

Pi Yijun, an anti-drug adviser for the city’s government, said that celebrities were being targeted because “these people have a large number of fans, so their behavior tends to have a huge influence on young people.”

The search of Jaycee Chan’s home was seen by many of his fans, as China’s state-run broadcaster CCTV aired footage. Chan’s face was pixelated as he showed police to his stashes of marijuana.

Ko’s face was pixelated on CCTV, where he apologized for being “a very bad example.” Jaycee Chan’s management team, M’Stones International, apologized on the star’s behalf and said they would “supervise his rehabilitation and help him return to the right path.”