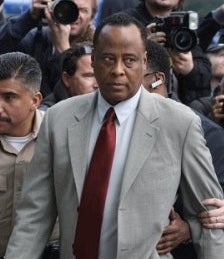 Dr. Conrad Murray’s lawyer is challenging the suggestion that his client stopped administering CPR to Michael Jackson to hide drug vials, saying that a leaked witness’s account is inconsistent and unsupported by the evidence.

In a statement on his firm’s website late Monday, attorney Ed Chernoff  disputed the recollections of Alberto Alvarez, the singer’s logistics director, about the day Jackson died at his Los Angeles home on June 25, 2009.

On Tuesday, the Associated Press revealed that it had documents detailing  Alvarez’s statements to investigators. Alvarez reportedly said Murray stopped CPR on the unconscious star and deliberately delayed calling the paramedics to collect drug vials in the home.

Chernoff said Alvarez’s recollection came “more than two months after Michael Jackson’s death and is inconsistent with a statement he gave the police the day after Mr. Jackson was taken to the hospital.

"Further, his statement does not match up with much of the physical evidence found at the scene."

Murray pleaded not guilty to charges of involuntary manslaughter Feb. 8. A preliminary scheduling hearing is set for April 5. If found guilty, Murray could serve up to four years in prison.

Chernoff also said that with Murray’s next court hearing is scheduled in ten days, the defense team expected more leaks — but "we will not be trying this case in the press."

"We are confident that a fair trial will ferret out the truth."
x
Looks like you're enjoying reading