Michael Jackson was always obsessed with being the biggest, selling the most and making the most money – but after the extraordinary success of “Thriller” in 1983, his grandiose sales projections and much-hyped dollar figures didn’t always pan out.

That’s why we need to take the totals being bandied about in the announcement of a new deal between the Jackson estate and Sony Music with a grain of salt. 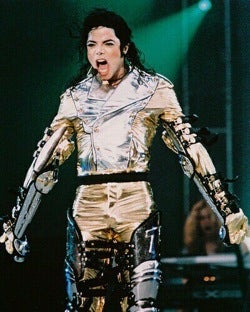 The seven-year deal, which Jackson attorney John Branca says “exceeds all previous industry benchmarks,” topping recent six-figure deals to Bruce Springsteen and Jay-Z, reportedly will deliver the estate $200 million for 10 projects, the first of which was the “This Is It” film and CD soundtrack.

The payday, it has been reported, could rise as high as $250 million if certain conditions are met.

And there’s the rub — because those certain conditions assume enough new material to fill the pipeline, and a continuing demand that may well fade over time, particularly in an era of rapidly declining music sales.

“The deal makes sense if there’s enough good unreleased stuff in the vaults, or more likely if they can find good new ways to use the old music,” says a Sony insider who did not wish to be identified.

“But it’s not like the projects are in place. Right now, this is mostly about potential, and nobody really knows how it’s going to play out.”

Media attention to the deal calls to mind the initial reports of Jackson’s renegotiated deal with CBS Records in 1991, on the heels of his record-setting sales during the 1980s.

At that time, Jackson’s camp claimed the deal guaranteed hundreds of millions, while some accounts spoke of a payday as high as $1 billion – though those figures would only have been reached if all of Jackson’s subsequent recordings had reached the 40-million sales of “Thriller,” his top-seller.

In fact, his entire output for the decade was one new album, “Dangerous,” one album that mixed new songs with greatest hits, “HIStory,” and an album of dance remixes. None of them sold anywhere near “Thriller” levels, and the deal ended up netting Jackson only a fraction of the figures that had initially been trumpeted. The actual value of the deal was reportedly closer to $50 million.

Since his death, Jackson has sold more than 31 million albums worldwide, making him by far the biggest-selling artist. Sales were particularly strong in the months after his death, and have since leveled off.

Current plans call for a new, expanded version of Jackson’s 1979 album “Off the Wall,” and an album of unreleased material currently being assembled by longtime advisor, friend and estate co-executor John McClain.

The new deal covers more than just music, permitting Sony and the Jackson estate to use the singer’s music in films, video games, theatrical projects and future platforms that may be developed.

At a time when music sales have declined precipitously, those other projects will make up a critical part of the arrangement for Sony – but none of them have been decided upon, which makes much of the deal nebulous.

Though McClain says that Jackson left behind more than 60 unreleased recordings, the singer released little but repackagings and greatest-hits compilations during the final decade of his life. His last four albums – “Greatest Hits,” “Number Ones,” “The Ultimate Collection” and “The Essential Michael Jackson” – were all collections drawn largely from the five studio albums he released between 1979 and 1991.

“This Is It” contained one “new” song, which was actually a tune co-written with Paul Anka in the early 1980s.

All of this would suggest that Jackson’s unreleased recordings may not be the treasure trove that Sony and the estate would wish.

Then again, at a time when the Elvis Presley estate can make $50 million to $60 million annually through music sales and licensing, Sony and the Jackson estate may not need a steady stream of new material to make new money.

“I don’t know what there is in the vaults,” said an executive who worked with Jackson for years. “But the guy has sold more than 30 million albums since he died. And if you look at Elvis and Sinatra and all that, the potential is certainly there.”

CORRECTION: The original version of this article misspelled the name of Jackson estate co-executor John McClain.