Aariel Maynor was sentenced Tuesday to life in prison with a minimum of 150 years for the murder of philanthropist Jacqueline Avant, wife of celebrated music executive Clarence Avant.

Maynor, 30, arrived at the Los Angeles airport courthouse in a wheelchair and showed no reaction when the sentence was handed down.

The parolee broke into the Avant family home on Dec. 1 in Beverly Hills, and shot Jacqueline Avant in the back. About an hour later, he was taken into custody in the Hollywood Hills after shooting himself while burglarizing a second home. An AR-15 style weapon was recovered from the second location. 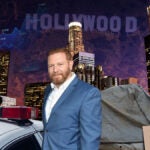 Court documents say Maynor recalled in one of his jailhouse phone calls that he went to the second location hoping to score after the burglary at the Avant house failed.

Maynor had a lengthy criminal history before his Dec. 1 crime spree, and had been granted parole from a California state prison just three months earlier.

Jacqueline Avant was involved with several charitable causes and considered a pillar in her local community. Her daughter, Nicole Avant, served as U.S. ambassador to the Bahamas during President Barack Obama’s administration. Nicole is the wife of Netflix co-CEO Ted Sarandos and co-produced a 2019 Netflix documentary about her father’s life titled “The Black Godfather.”

In a March news release, Los Angeles County District Attorney George Gascón said Maynor would spend the rest of his life in prison for the Dec. 1 killing. “This crime continues to shock the conscience. Mrs. Avant’s death was a tragic loss felt by our entire community,” Gascón said. “In this case, the defendant is facing 170 years to life in prison and is ineligible for elderly parole.”