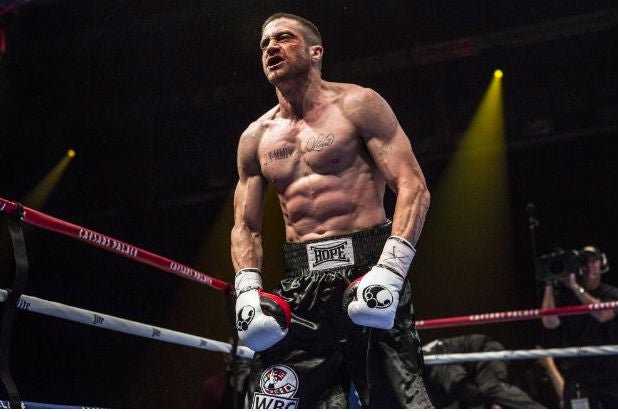 The Weinstein Company unveiled its upcoming slate on Thursday at the Cannes Film Festival, with an embarrassment of riches in dramatic films starring Jake Gyllenhaal, Bradley Cooper and Cate Blanchett coming this year.

Gyllenhaal seemed shy as he walked on the stage at the Majestic Hotel salon, but the footage from his upcoming “Southpaw” was nothing if not reminiscent of the intensity of “Raging Bull.” Weinstein promised a performance of that caliber, and so did Gyllenhaal.

“It was a tough journey,” the actor acknowledged, saluting director Antoine Fuqua. “Antoine gave me everything of his, and I gave him everything of mine.”

The hard-hitting boxing drama is already being spoken of in terms of Oscars, especially since many felt Gyllenhaal was robbed of a nomination this year for “Nightcrawler.” But he could not look more different than the gaunt, haunted character of that film. In the footage shown, Gyllenhaal is muscle-bound and tattooed, angry and bloodied in many shots. Rachel McAdams plays his wife.

The film “hit it out of the ballpark, critically and commercially,” said Weinstein. Gyllenhaal slipped back out, presumably back to his duties on the Cannes jury, but TWC promised to show the film in coming days privately.

The lineup looked strong beyond that film too, with Dane DeHaan costarring with the evermore popular Alicia Vikander in “Tulip Fever,” about the Dutch painter falling for the wife of a patron in 17th century Holland.

Among other highlights:
• Bradley Cooper starring in “Adam Jones,” a contemporary tale of a troubled American chef in London. Sienna Miller costars with him.
• “Carol” by the iconic indie director Todd Haynes promises a doomed love story between 1950s wife Cate Blanchett and a seductive Rooney Mara.
• Did we mention Quentin? Tarantino’s next barn-burner “The Hateful Eight” got a sneak look at the presentation. Samuel L. Jackson stops a stagecoach in the middle of the snow with a mere look. The film will be in 70 MM and out at the end of the year.
• “Macbeth” starring Michael Fassbender and Marion Cotillard looks beautifully shot and will be out in November .

There were also films meant to thrill audiences outside of the Oscar race, including “No Escape” starring Owen Wilson as a dad who moves his family to Malaysia only to be caught in the middle of political violence with his wife and two young children. “The Little Prince” is an animated take on the classic fantasy tale. The Weinstein Company also just closed a deal to distribute “Hands of Stone,” another boxing movie, this one starring Edgar Ramirez and Robert DeNiro, for 2016.

One film that brought tears to the eyes of many won’t be out until 2016. “Lion” stars Dev Patel in a true-to-life story about an Indian man adopted by Americans who goes on the hunt for his Indian birth family. Rooney Mara and Nicole Kidman costar in that one, and the footage of a wide-eyed Indian boy abandoned on a train platform left many wiping tears.