“And it’s a show about these people trying to launch a business,” the “New Girl” alum explained. “And the response I’m getting is that people are starting to really find the characters and find different people they like and different arcs they care about watching. It’s been really exciting.”

The show’s pilot featured a montage of men and their anatomy, and sometimes just their anatomy, as Doug, Ophelia Lovibond’s feminist Joyce, Bambi (Jessica Lowe), Tina (Idara Victor) and newly-minted photographer Richie (Oscar Montoya) sought out the right model for their debut issue of Minx mag. It’s a scene that may seem shocking at first, but keep watching and it’s the characters viewers will remember.

“Ellen’s [Rapoport’s, creator and executive producer] writing is so rich and she’s really talented, like she’s a real talent and I thought, ‘Man, I just feel so much about these characters already,” Johnson said. “And I want to see what happens with Bambi and Tina and Richie. I like these people.’ And this was from the first 30 pages. So, I’m really happy that people are getting past that first wave of, ‘Oh, there’s a lot of penises in this show.’” 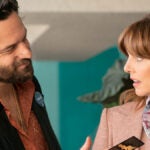 And since there is nudity, behind the scenes, the show employs an intimacy coordinator.

“Honestly, I think it’s great. Ophelia, who plays Joyce on the show, we were doing press together, and she said it [in] a really smart way. She said it’s like doing a stunt without a stunt coordinator. And it kind of summed it up,” Johnson said. “When there’s a sex scene or there’s nudity, there’s a vulnerability of the actor or the actress that you as a fellow actor shouldn’t be in control of, or the director shouldn’t be in control of. So there is a person now that that’s their main job.”

“So I get to just go, ‘Ok, there’s a bunch of nudity here, there’s an intimacy coordinator to make sure that everything is above board and everybody’s comfortable’. And I get to go back to doing what I want to do, and that’s worry about my character,” he added.

And speaking of Doug and the other characters, as the episodes that have rolled out so far have shown, Doug believes in Joyce, who is peppering the magazine with thoughtful and boundary-pushing articles. And he especially believes in her ability to make him money.

“What I love about Doug is he’s a true capitalist,” Johnson said. “I think, as a character trait, your number one thing being a capitalist I find fascinating. And what he sees in Joyce is that she’s got spunk; She’s hungry; She’s aggressive; She really wants to win. And if you’re going to invest in somebody, she seems like a likely person to invest [in]. When he sees that writing and he gives it to his models, they love it.” 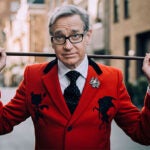 Johnson thinks Doug also sees Joyce and Minx mag as a way to crack into the mainstream.

“Well, I think what it is, is he believes in her. And I think when you believe in somebody, and you actually like the way their brain works, there is an affection there,” he said. “And I think selfishly for Doug is he sees Joyce being able to take himself and his Bottom Dollar team to levels they never would have been able to get to. So I think he sees ‘Oh, she’s potentially a lotto ticket right here.’” 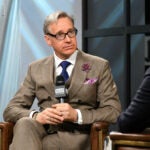 New episodes of “Minx” drop on Thursdays and as it continues, the show just may reveal the hinted at but yet untold backstory between Doug and his secretary Tina, who go way back.

“I’m not giving anything away. But, the Doug Tina backstory is a story that pulled me into wanting to do it,” Johnson said of one of the reasons he signed on to the show.

“When you think of somebody like Doug and you look at how he started, right, and it’s Bottom Dollar Productions, and it’s all these people who work for him, well, how did it start? Who is he? Who’s his team? And then he’s got Bambi who used to be a model who’s now promoted, and Ritchie, who’s now his photographer. And I’m like, who is this person? And Tina has always been with him,” Johnson said. “And so, the Doug-Tina thing is a relationship that really matters to me and I think really matters to the character. So I don’t want to give anything [away] … because I don’t know where it goes in future seasons, but it is a relationship that I think is really important for the characters.”

New episodes of “Minx” drop on HBO Max through April 14.