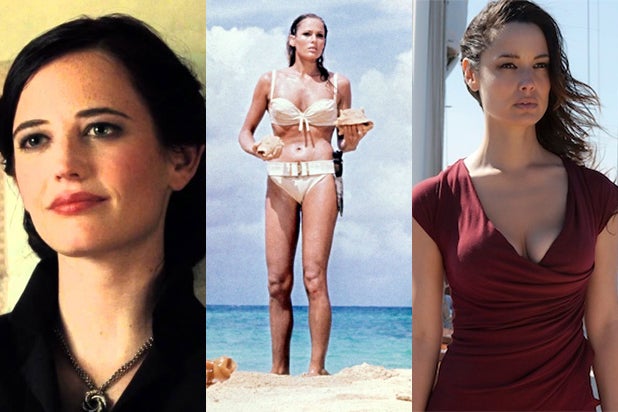 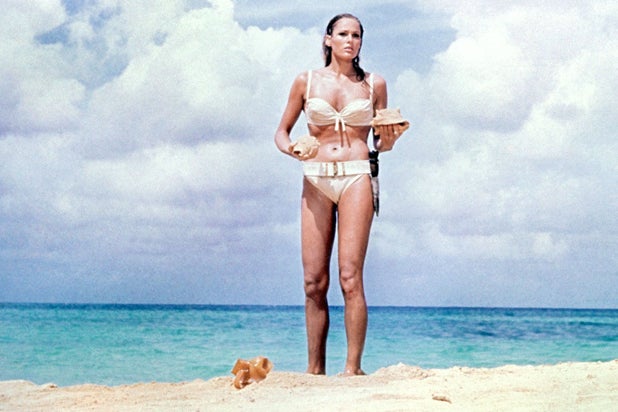 Ursula Andress as Honey Ryder, "Dr. No" (1962)  Widely regarded as the first Bond Girl, Honey Ryder's emergence from the ocean clad in a white bikini is considered one of the most iconic moments in 007 franchise history. 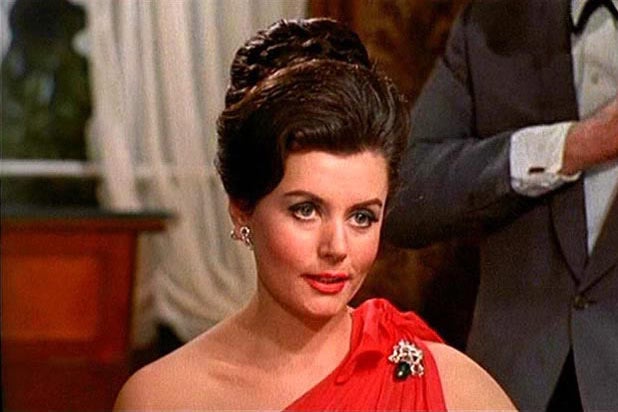 Eunice Gayson as Sylvia Trench, "Dr. No" (1962) & "From Russia With Love" (1963)  Sylvia Trench introduced herself to James Bond as "Trench, Sylvia Trench," which inspired him to reply with his now iconic "Bond, James Bond" phrase. She's also the only Bond Girl to appear in more than one film.

Daniela Bianchi as Tatiana Romanova, "From Russia With Love" (1963)  Tasked with seducing and killing James Bond, Tatiana falls for the British spy instead, ultimately teaming up with him to take down the deadly Rosa Klebb.

Honor Blackman as Pussy Galore, "Goldfinger" (1964)  Perhaps the most suggestively named Bond Girl of all time, Pussy Galore led a crew of all-female pilots, and originated in Ian Fleming's novels.

Shirley Eaton as Jill Masterson, "Goldfinger" (1964)  Poor Jill Masterson made her biggest impression posthumously, forever remembered for being painted gold from head to toe by the villainous Goldfinger.

Claudine Auger as Domino Derval, "Thunderball" (1965)  Another bad-girl-turned-good, Bond encountered his enemy's girlfriend, Domino Derval, underwater, and persuaded her to turn on her man, Emilio Largo.

Diana Rigg as Teresa di Vicenzo, "On Her Majesty's Secret Service" (1969)  The only woman who ever became Mrs. James Bond, Teresa di Vicenzo became Tracy Bond before being murdered by Ernst Stavro Blofeld, one of Bond's most famous nemeses.

Jill St. John as Tiffany Case, "Diamonds Are Forever" (1971)  A diamond smuggler who worked with Bond villain Blofeld, Tiffany Case became yet another bad girl who could not resist Bond's moves and was persuaded to join the side of the good.

Lana Wood as Plenty O'Toole, "Diamonds Are Forever" (1971)  Another suggestively named eye-candy of a Bond Girl, Plenty O'Toole thought she was bagging a rich playboy in Bond, but got caught in the crosshairs of his rivalry with Blofeld and pushed out a window for her troubles.

Jane Seymour as Solitaire, "Live and Let Die" (1973)  A psychic who would lose her powers if she ever made love to a man, Solitaire inevitably proved unable to resist James Bond and indeed lost her gift as a result.

Barbara Bach as Anya Amasova, "The Spy Who Loved Me" (1977)  A KGB agent codenamed "Triple X," Anya Amasova reluctantly teamed up with Bond to retrieve stolen microfilms after the KGB and MI6 realized they had the same goal.

Carole Bouquet as Melina Havelock, "For Your Eyes Only" (1981)  A vengeful beauty toting a crossbow, Melina Havelock teamed up with Bond to find the man who killed her parents.

Maud Adams as Octopussy, "Octopussy" (1983)  The only Bond Girl to be named for the title of the film she appears in, Octopussy ran an all-female floating island and jewelry smuggling ring and helped Bond kill her former partner after he turned on her.

Grace Jones as May Day, "A View To Kill" (1985)  A deadly assassin who at first tried to kill James Bond, she eventually turns good, ultimately meeting her death while working with the spy to try and dismantle a bomb.

Famke Janssen as Xena Onatopp, "Goldeneye" (1995)  The first femme fatale of the modern Bond era, Xenia Onatopp had no qualms about killing many people and tried to kill Bond on several occasions.

Halle Berry as Jinx, "Die Another Day" (2002)  Jinx's most memorable moment is an homage to original Bond Girl Honey Ryder's rise from the sea, clad in a bikini (orange this time), with a knife at her hip.

Rosamund Pike as Miranda Frost, "Die Another Day" (2002)  In a reversal of a typical Bond Girl plotline, Frost at first appears to be a Bond ally and then reveals herself to be a double agent working for the enemy, in this case Gustav Graves, the man she was assigned by MI6 to investigate.

Eva Green as Vesper Lynd, "Casino Royale" (2006)  Daniel Craig's introduction as Bond included his version of a tragic love story. Vesper Lynd captured Bond's heart, then revealed herself to be a double agent before getting killed.

Olga Kurylenko as Camille Montes, "Quantum of Solace" (2008)  A Bond Girl after vengeance for her slain family, Camille tried to infiltrate General Medrano's inner circle, then teamed up with Bond after she failed on her own.

Gemma Arterton as Strawberry Fields, "Quantum of Solace" (2008)  An MI6 agent who finds herself unable to resist Bond's charms, she falls into bed with him and then -- in an homage to "Goldfinger" -- is killed by being coated with a layer of oil.

Bérénice Marlohe as Severine, "Skyfall" (2012)  A captive of the film's villain Raoul Silva, Severine agreed to team up with Bond after he promised to free her. Unfortunately, her captor shot her before the secret agent could carry out his plan.

Naomie Harris as Eve, "Skyfall" (2012)  Miss Moneypenny is not always considered a Bond Girl due to her professional relationship with 007, but the latest incarnation, Eve, gets closer to the super spy than any of her predecessors.

Lea Seydoux as Madeleine Swann, "Spectre" (2015)  Bond teams up with Swann, the daughter of a rogue member of Spectre, to try to take down the shadow group's mastermind, Ernst Blofeld (Christoph Waltz).

Monica Bellucci as Lucia Sciarra, "Spectre" (2015)  The Italian actress is the oldest cast as a Bond Girl -- or Bond Woman, as many wrote -- and played a small but crucial role as the wife of an assassin who gives Bond a crucial piece of information and receives the spy's full attention in bed.