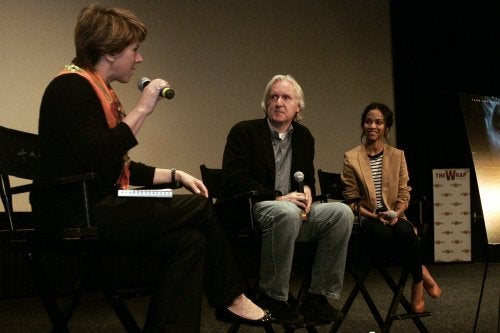 "Avatar" director James Cameron responded to right-wing critics of his blockbuster hit movie on Tuesday night, saying that "as an artist, I felt a need to say something about what I saw around me."

Speaking at a private industry screening of the film, the director with his star Zoe Saldana said that  "Avatar" — with its depiction of mineral exploitation on a distant planet and a cadre of trigger-happy mercenaries charged with instituting a scorched earth policy — is very much a political film.

But he rejected comments by critics that the film is un-American even if it is an allegory for American military forays.

"I’ve heard people say this film is un-American, while part of being an American is having the freedom to have dissenting ideas," Cameron said, prompting loud applause from a capacity crowd at the ArcLight Hollywood.

"This movie reflects that we are living through war," Cameron added. "There are boots on the ground, troops who I personally believe were sent there under false pretenses, so I hope this will be part of opening our eyes."

Conservative commentators such as John Podhoretz and John Nolte have blasted the film in recent weeks. In "The Weekly Standard," for instance, Podhoretz wrote, "The conclusion does ask the audience to root for the defeat of American soldiers at the hands of an insurgency. So it is a deep expression of anti-Americanism– kind of."

In an hour-long question-and-answer period with TheWrap’s editor-in-chief Sharon Waxman, Cameron and star Zoe Saldana discussed the film’s environmental message, its technological innovations, the future of 3D and another long-gestating project of the director’s, "Battle Angel.

The director said:  "I don’t know if there is a political agenda exactly, but as an artist I felt a need to say something about what I saw around me. I think we all need to take stewardship of our planet."

"I think everyone should be a tree hugger," Cameron added.

In creating the long limbed, blue skinned Na’vi, the aliens that lives in commune with the lush naturescape on the fictional planet Pandora, the director said he was attempting to create a race that was aspirational. 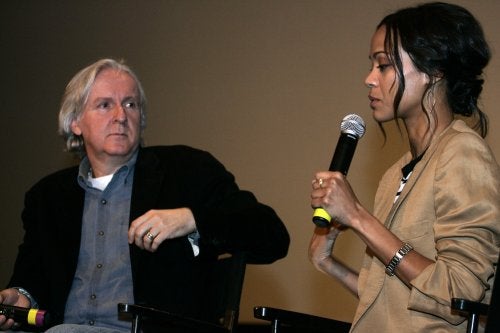 Beyond just being thought-provoking, the famously meticulous filmmaker said he hoped that his planet would be a tactile, realistic and ultimately transformative place.

"I wanted it to be believable and a sort of wish-fulfillment," Cameron said. "I wanted to tap into a sort of child-like dream state where you don’t know your limitations and you think you may be able to fly someday."

"I set out to not fetter my imagination," Cameron added. "I wanted to create a whole life on film that was another planet or biosphere."

It was clear that the audience at the ArcLight Hollywood enjoyed its stay on Pandora with many return visitors among the crowd. Based on a show of hands, about two thirds were seeing the film for the second or third time — a phenomenon that has helped propel "Avatar" past the billion-dollar mark, good enough for second place on the list of highest grossing movies of all time. Cameron said he never expected to have another hit on the level of the top film on that list, the director’s 1997 Oscar winner "Titanic"

"I had no reasonable expectation that this would happen twice in a lifetime," Cameron admitted. "I’m just enjoying it while it lasts, because the second awards season is over and the box office is done it evaporates."

In contrast to his "King of the World" persona, Cameron came across as unfailingly modest.

"Not to challenge the auteur theory, but this was a collaborative experience," Cameron said. "People mistakenly imagine that these movies spring out of my forehead fully formed."

Cameron said that creating Pandora’s mythical beauty came out of working in concert with a team of designers and engineers over a three-year process. He also credited Saldana and her co-stars with developing the Na’vi’s distinctive movements and dialect. Among Saldana’s challenges, the director said, was learning how to ride the film’s flying dragon-like creatures, called banshees.

"I didn’t want these characters to just be riding dragons in saddles as we’ve seen in many films," Cameron said. "I wanted the actors to be sort of standing in a more athletic pose."

Despite the technical hurdles of creating a virtual world, Saldana said that Cameron constantly counseled the actors to remain focused on their performances and to leave the logistics to him.

"Jim, Sam (Worthington), and I would spend hours talking about these characters," Saldana said. "We had to create this movement where the Na’vi always faced forward because they had such trust in life and in their mannerisms. We had to make everything genuine and pure." 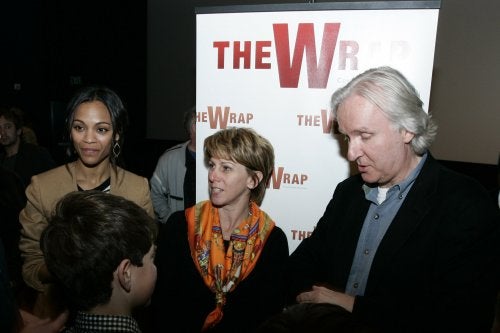 Central to this, Cameron said, was having the ability to convincingly depict the facial expressions of Saldana and her fellow actors through motion-capture helmets that were designed for the film.

"It’s all about the closeup," Cameron said. "Think of CG as makeup. It’s the same idea as embellishing upon Zoe’s features."

Saldana was the first person cast, but she had actually read for the director a year prior to signing up for "Avatar" for the movie that was to be his follow up to "Titanic," "Battle Angel."

"I was first put on film for ‘Battle Angel,’ so when I went in a second time, I was like, ‘Wait a minute,’" Saldana said. "I went from being a robot to a jungle warrior."

Part of what spurred Cameron to switch gears from "Angel" to "Avatar" was a belief that technology had matured to the point where he could finally realize Pandora. It was not until he realized that film was entering a 3D renaissance that he decided to make his alien film in three dimensions.

Cameron linked his decision to undertake such an ambitious undertaking to an lifetime spent trying to recapture the sense of wonder he felt as a child seeing movies like "2001: A Space Odyssey." 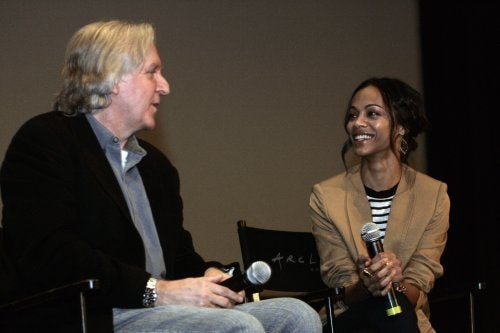 "I could not understand how that magic happened," Cameron said. "Trying to crack that code set me on the path to being a filmmaker."

Befitting the film’s ecologically friendly message, Cameron stressed that the wondrous scenery brought to life in "Avatar" was not consigned to the silver screen.

"People don’t have to go to another planet," Cameron said. "There are a lot of wonderful things in nature that are all around us."