“It’s the first time they’ve ever re-created the motorcade,” said Franco, who took a break from filming to speak to TheWrap about Rattlestick West, a new theater he’s opening in Los Angeles with his friend and frequent collaborator Scott Haze, who also happens to be busy filming in Dallas.

While working on a play together at New York City’s Rattlestick Playwrights Theater in 2014, Haze and Franco decided to join forces with its artistic director and co-founder David Van Asselt.

Rattlestick West’s mission is to seek out unique new voices, work with new and emerging playwrights and establish a home where playwrights can work with actors to explore stage projects as well as film and innovative media.

In this coming season, Rattlestick West will produce five plays at the Sherry Theater, including works by Scott Caan, Daniel Talbott and Suzanne Vega’s chamber musical based on the life of “The Heart Is a Lonely Hunter” author Carson McCullers, with songs co-written by Vega and Duncan Sheik. Rattlestick is also teaming with the Boston Court Theatre to co-produce “Seven Spots on the Sun” by Martín Zimmerman at the Boston Court in Pasadena.

Also Read: James Franco Mashes Up 'Freaks and Geeks' and 'Saved By the Bell' for AOL's 'Making a Scene' (Photos)

Why did you guys decide to start Rattlestick West?
James Franco:
Scott and I started with Rattlestick in New York. My former teacher, Robert Boswell, had a play that he wanted to get going called “The Long Shrift.” I knew I’d be doing “Of Mice and Men” on Broadway, but of course I couldn’t do just one thing. If I’m going to be on Broadway, then I want do something Off Broadway too. So I tried to act in both plays, but it was insane with the “Of Mice and Men” rehearsals, so I opted to direct this other play, “The Long Shrift.”

My theater agent at CAA, Joe Machota, was looking for the right theater to do it in. That’s when I met David at Rattlestick. We got along and I thought it was the best place to do it because he just does what he wants. He’s not trying to do a commercial venture, it’s an artistic venture — the kind of place where he can do what he wants to do. It’s great to hook up with a space like that. Scott has been my collaborator for years and he acted in the play. We had an amazing experience. Scott and I both have theater spaces in L.A. on the same block and we’re devoted to them. I think David was looking for a place to work in LA.

Scott Haze: David formed Rattlestick in 1994. They were putting on plays by Stephen Belber and Adam Rapp, and the content was really bold. I’ve had the Sherry Theater for 10 years, but it hasn’t had the kind of focus and direction that I saw at Rattlestick. We just wanted a West Coast version of it. James has Studio 4 right next to the Sherry Theater, and we have an Emerging Artists program that gives young actors and writers the opportunity to do stuff and not just be stuck in confines of Hollywood.

Franco: There’s a different energy, both in the audience and the way the plays are reviewed, and even in the kind of work that’s done on stage. It’s just different, not to say that I haven’t seen amazing things in L.A. There’s just something about the context that feels a little different. That being said, it’s not going to keep us from trying to do the same kind of serious work in L.A.

James, you’ve done a lot to promote new voices. Why is it so important to you?
Franco: I’m a teacher. That’s the newest chapter in my life. I did my sixth year teaching in graduate film school and I’ve had my own school, Studio 4, for a year now. I’ve gone back to school and loved school. I’ve been to six schools or something like that, but enough’s enough. I still loved it though, and teaching was a way to have a say in there academic environment that I loved. It’s a way to help other people find the kind of opportunities that I was given. I remember when I was coming up as an actor and struggling and feeling like on I was on the outside of things just trying to get in. I like to try and open doors for people and give people with talent and passion a chance, because it’s a hard business sometimes.

Haze: The main idea is to work with writers. L.A. is so centered around actors and actor groups, but we really want to develop good plays with writers. David does it in NY and we want to do it in LA. The film festivals we’re doing and other ancillary programs? Those deal with actors and different forms of media.

Do you guys plan to act in any of the plays at Rattlestick West, even if it’s just for one night?
Franco: Scott and I are talking about one. We’re considering one that Scott would act in that I’d direct. There’s so much we’re going to do. Right now, we have a film festival going.

Haze: James’ students wrote original one-acts at Studio 4 and we’re showcasing those plays. We have three plays. If they’re good and we want to get behind them then David will step in and maybe take them to New York. James and I will, for sure, be in one — it’s just a matter of our schedules.

I saw that Scott Caan actually wrote one of the plays at Rattlestick West. Is he the next Arthur Miller?
Haze: Scott wrote a good play. It’s great. Him and James went to school together at Playhouse West.

Franco: Scott is one of the most prolific writers. He certainly has more plays than Arthur Miller, that’s for sure. He writes like a madman!

Scott, tell us about your role in Jeff Nichols‘ “Midnight Special” and anything else you have coming up.
Haze: Jeff is a genius filmmaker. He’s a craftsman and he knows exactly what he wants. He’s unbelievable with the way he communicates with actors. As soon as he called me up, I said ‘yes’ immediately. I saw it at Warner Bros. and it’s a good movie. I play a guy named Levi who helps search for a missing boy with special powers. [Haze also recently directed the documentary “Mully,” which will premiere in competition at the Austin Film Festival next month. Shot entirely on location in Kenya, the film chronicles the life of Charles Mully, the founder of a children’s rescue organization.]

James, can you update us on your upcoming projects? Let’s start with “Zeroville.” Why wasn’t it ready for the fall festival circuit, and when can we expect to see it?
Franco: It’s funny, it’s a movie about a film editor and we’re stuck in editing. Life is imitating art. It just wasn’t ready and we want it to be perfect. We were gunning for Venice because we shot part of it there a year before, but now that we’re not racing, we’re taking our time and making sure it’s good. My guess is we’ll premiere maybe early next year.

What about your adaptation of Chuck Palahniuk‘s “Rant”?
Franco: It’s coming slowly but surely. We’re working on it with Pamela Romanowski and Matt Rager, one my screenwriting collaborators.

And “The Disaster Artist,” about the making of the cult classic “The Room,” in which you’ll play Tommy Wiseau?
Franco: It’s moving full steam ahead. We’ve got an awesome script from [Scott] Neustadter and [Michael H.] Weber. Brandon Trost, our DP on “This Is the End” and “The Interview,” is going to shoot it. We’re planning to go in early December. My brother [Dave] is 100 percent in it and Seth Rogen, who’s producing via his company Point Grey, will probably play a part too.

One of my favorite scripts I’ve read since I moved to Los Angeles was an adaptation of Brad Land’s memoir “Goat,” about college hazing, that you produced. Do you think we could see that at Sundance?
Franco: Sundance hasn’t announced anything yet, but I wouldn’t be surprised if it came out there. It’s great. I’ve seen it and it’s awesome. Everyone did a great job.

Can you say anything about your character in the R-rated animated movie “Sausage Party”? I’m dying to know what kind of food you play.
Franco: I don’t think I can say much about that one. Get ready for some raunchy, fun animation!

And finally, I wanted to ask you about that Lana Del Rey book you wrote with David Shields, “Flip-Side: Real and Imaginary Conversations with Lana Del Rey.” Why was it delayed?
Franco: It was delayed because the publisher was really sleazy and put it out without my permission or anybody’s permission. 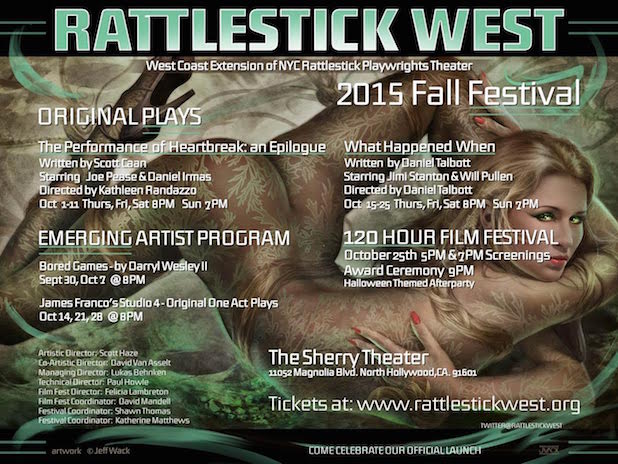