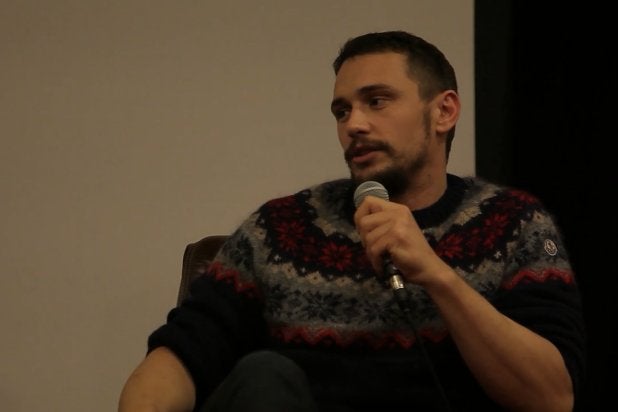 James Franco closed out Slamdance’s 21st festival on Thursday by sitting down for its latest “Coffee With” event. His candid chat about independent filmmaking was followed by a screening of “Yosemite,” which Franco produced through his Rabbit Bandini Production company.

The film, directed by Gabrielle Demeestere, chronicles the adventures of three 5th grade friends as they and their suburban community must deal with the looming threat of a mountain lion.

Franco’s passion for independent film has a direct correlation with what he finds challenging about the traditional movie business. He talked about being “very frustrated by the fact that I’d really trained as an actor, but I was still dependent on all these other people to work.”

He said that the best way to bring a film vision to life is to “find your people.” It’s one of the lessons he teaches students at Studio 4, his own acting and film schools in New York and Los Angeles.

“One of the things I really try to emphasize there is community,” he said. “So that your not just dependent on the gatekeepers [of this] insular industry.”

Franco said said that either you’re “a Seth Rogen who can write and act and direct” or you have your people that can make movies, and then you just go and do it.

“Yosemite” is the result of that very approach.

The most boring part of filmmaking to me is knocking on doors, trying to pitch ideas to people,” Franco said. “Isn’t it so much more fun to go out and make it and then show people and they get excited about it?”

It’s that very approach that he not only teaches in principal in his classes, but in practice as well. “That’s how I run my graduate classes. All those classes are production based,” Franco said. “And by the end, every year, each class has a movie.”

Lookit our shee-it! Franco’s materially obsessed character from the indie cult hit is a popular costume this Halloween

Alien has come to Earth this Halloween, cementing him as a pop-culture icon
View In Gallery