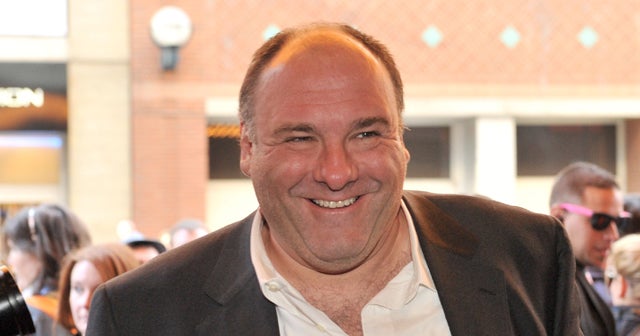 James Gandolfini, who helped usher in a new golden era of television in his Emmy-winning role as Tony Soprano on HBO's "The Sopranos," died suddenly in Rome of a heart attack. He was 51.

A spokeswoman for the cable network said that Gandolfini was on holiday in Italy when he died Wednesday, and hospital officials confirmed the cause of death Thursday.

"He was a genius. Anyone who saw him even in the smallest of his performances knows that," "Sopranos" creator David Chase said in a statement. "He is one of the greatest actors of this or any time. A great deal of that genius resided in those sad eyes. I remember telling him many times, 'You don't get it. You're like Mozart.' There would be silence at the other end of the phone."

"We're all in shock and feeling immeasurable sadness at the loss of a beloved member of our family," HBO said in a statement. "He was special man, a great talent, but more importantly a gentle and loving person who treated everyone no matter their title or position with equal respect. He touched so many of us over the years with his humor, his warmth and his humility.  Our hearts go out to his wife and children during this terrible time. He will be deeply missed by all of us."

Gandolfini won three Emmys for anchoring "The Sopranos," which changed TV with novelistic, nuanced writing that invited us to root for the bad guy. Tony Soprano, a beleaguered mob boss with mom issues, was one of many brusque, intimidating Gandolfini characters whose big frames concealed often generous hearts.

It is impossible to overstate the show's impact on recent television dramas, or Gandolfini's role in its success.

Only his charm made it possible for us to stay with Tony as he betrayed and murdered those he loved most. Lugging us along on an empathy crash course, Gandolfini asked us to understand Tony without necessarily liking him.

In spite of ourselves, we usually did both.

Gandolfini had recently filmed "Criminal Justice" for HBO, which had received a limited series order. Among his breakthrough roles was playing a fake-friendly wiseguy in "True Romance." He also showed his gentle side in "Where the Wild Things Are," playing wild thing Carol as a depressed middle-aged malcontent, and last year portrayed former CIA director Leon Panetta in "Zero Dark Thirty."

But he will always be best known as Tony. "The Sopranos," widely cited as one of the best shows in the history of television, opened the door for similarly daring series including HBO's "The Wire," AMC's "Mad Men" — created by "Sopranos" alum Matthew Weiner — and AMC's "Breaking Bad," which also features a criminal protagonist. "The Sopranos" also influenced HBO's "Boardwalk Empire," from "Sopranos" veteran Terence Winter.

One could make a convincing case, in fact, that it has influenced every scripted series since its 1999 debut, by creating a culture in which showrunners like Chase have as much control over their shows as directors have over their films.

Born in Westwood, N.J. on September 18, 1961, Gandolfini performed in the 1992 Broadway production of "On the Waterfront" prior to the 1999 premiere of "The Sopranos."

Following the wrap of "The Sopranos" in 2007, Gandolfini took on a number of big-screen roles in films such as the 2009 remake of "The Taking of Pelham 123," and "Welcome to the Rileys." He also displayed his comedic chops this year in "The Incredible Burt Wonderstone."

In 2009, he appeared on Broadway with Jeff Daniels, Marcia Gay Harden and Hope Davis in "God of Carnage." It marked a return to Broadway after a 1992 run in "On the Waterfront."

"If Broadway has a version of a guy you want in your foxhole, Jim Gandolfini was mine," said Daniels. "During our time together in 'God of Carnage,' we played 320 performances together. He didn't miss one. Sadly, I now miss him like a brother.”

Recently, Gandolfini had turned his attention back to television with a series of projects for HBO, including an adaptation of the book "Big Dead Place," about workers on the U.S. Antarctic Program.

Gandolfini understood how much the "Sopranos" meant to so many people, but responded to their praise with self-effacing sense of humor and humility.

"I can't really explain this except I think the Academy has an affinity for slightly overweight bald men," he said after winning his first Emmy in 2000. He had beaten Dennis Franz, a four-time winner in their category, Outstanding Lead Actor in a Drama Series.

Franz had played a deeply flawed cop on "NYPD Blue," but Gandolfini's character was even more damaged: a murderer and serial philanderer who also aspired to be a dutiful son, loving husband and generous father.

The show looked frankly at the fragility of life and death, including in a still-debated final scene in which Tony happily ate with his family, before an abrupt cut to black.

Hollywood was stunned by Gandolfini's death.

"It is with immense sorrow that we report our client James Gandolfini passed away today while on holiday in Rome, Italy. Our hearts are shattered and we will miss him deeply," said  Gandolfini's managers Mark Armstrong and Nancy Sanders. "He and his family were part of our family for many years and we are all grieving."

"For Deborah and Michael and Liliana this is crushing," Chase said of Gandolfini's wife, son and daughter. "And it's bad for the rest of the world. He wasn't easy sometimes. But he was my partner, he was my brother in ways I can't explain and never will be able to explain.”