James McAvoy in his latest film “My Son” was given no script, no specific dialogue and was only aware of basic plot details for his character. The remaining cast and crew was fully aware of everything that was about to happen to him, and in the first trailer for “My Son,” you can see him improvising and reacting in real time to the action as the story unfolds.

“My Son” is directed by Christian Carion and is a remake of Carion’s own French film from 2017. That film too was a similar improvisational experiment, in which the film’s lead was also kept in the dark about the plot until it all happened. In McAvoy’s case, that means we get to see him “have an experience that no actor gets to have,” as he says in an introduction for the trailer.

The remake of “My Son” was produced by STXfilms, and Peacock has now acquired the rights from the distributor and will premiere it exclusively on the streaming platform for free Sept. 15. 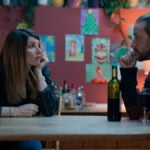 In “My Son,” McAvoy plays Edmond Murray, who gets a tearful call from his ex-wife (Claire Foy) saying their 7-year-old son has gone missing. It soon becomes clear their child was kidnapped, and he journeys through a town where his wife lives in search of answers.

The trailer touts that the fun of the film is in learning the revelations of the story at the same time McAvoy is in real life and wondering just what he’ll do next. But McAvoy’s character is clouded in mystery, and the purpose of the improvisation is to see in what direction he would take the character in revealing his dark past and how deep he might go.

Check out the first trailer for “My Son” here and above.