The title character in “James White” is a good guy who sometimes behaves badly. As a 21-year-old New Yorker, though, James (Christopher Abbott) isn’t atypical of his demographic when he, for example, drinks and takes drugs and dances until morning, as we see in the disorienting and slightly nauseating opening scene.

In the club, James is heavy-lidded and obviously high, with the dance floor’s rap beat easily drowning out “Don’t Let the Sun Catch You Crying,” which he’s listening to through headphones. He nods out in the cab on his way home.

When you see what’s awaiting James there, though, you understand that his night of excess isn’t strictly attributable to youth. His father has just died, and his mother, Gail (Cynthia Nixon), is sitting shiva. Also, mom has advanced cancer, and James is an only child — one who should no longer indulge in acting like a child. He frequently enlists his friend Nick (Scott Mescudi) for help, whether that means sitting with Gail or going to a bar together. James has no one else.

Writer-director Josh Mond‘s feature debut is a devastating portrait of the stress of being a caregiver, particularly one so young, that’s remarkably free of sentimentality or a typical tearjerker’s cues. Much of it focuses on logistics, such as running to the pharmacy, calling hospice for advice, or being aggressive about getting help in an ER whose staff’s hands seem to be perpetually tied.

In the outside world, James’ grief often manifests as anger. But when he’s with his mother, his softer side is evident. At one point, he asks a higher-up at a hospital to expedite the process of securing a bed for her. “I know it’s against protocol, whatever,” he tells the man. “But that’s my mom, you know?”

The story takes place between November and March, and right after James’ father passes away — and he spends more time drinking and getting into bar fights — Gail, still proud enough to wear earrings every day, tells him that it’s well past time for him to straighten out, get a job and stop freeloading on her couch.

He argues that he’s there to help her, and furthermore that he needs a vacation. With the inheritance from his father, James goes to Mexico with the intention of detoxing and clearing his head. And he stays there, even meeting a girl, Jayne (Makenzie Leigh), until the inevitable phone call comes, saying he’s needed at home. 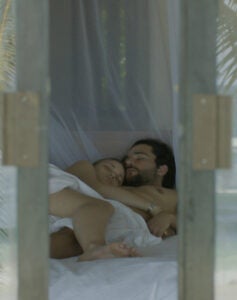 Gail’s downturn is heartbreaking as she becomes weak and delusional, and Nixon phenomenally expresses every moment of confusion, discomfort, and pain without ever reminding you of her vibrant past roles, or the fact that she’s acting. Abbott (“A Most Violent Year,” HBO’s “Girls”) is a revelation, creating a multidimensional character whose battling, sometimes uncontrollable emotions are clear in his warm and expressive eyes. James’ temper is obvious, as is his tenderness.

But you also read his disappointment easily when his mother has a difficult evening and Jayne leaves — saying that she “has to” go meet friends — even if she doesn’t register his need for support herself.

One of the most touching scenes in “James White” takes place in Gail’s bathroom. She calls out to James while still in bed, saying she has an urgent need to go. She’s too weak to walk, so he carries her (“like a princess,” he jokes) and waits for her to be done, regardless of a palpably unpleasant odor. When she is, she still can’t manage to move much and asks to just sit in there.

Gail leans into James’ chest as he holds her, then out of nowhere he asks her where she’d like to be. “Paris,” she answers. James readily describes a scenario of her future in France, which includes a man who loves her and regular visits with James and his happy family of a wife and two boys.

“You’re responsible for all this beauty,” James says. “Thank you.” His speech, a stunning piece of writing, is sublime; although Abbott had won your sympathy from the beginning, this is a moment in which James — the drunk, the troublemaker, the wayward son — is above criticism. He concludes with, “See me as a kind and loving man.” Done.