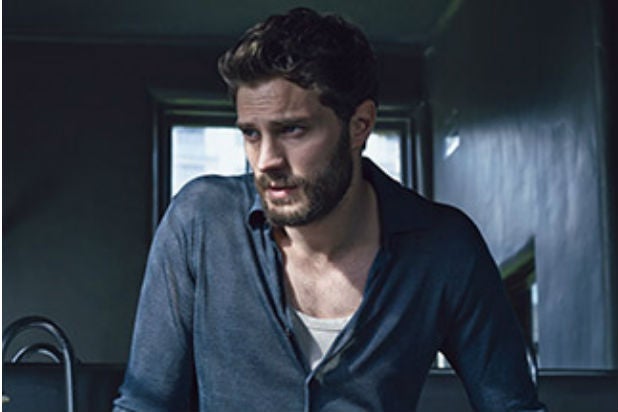 The crack of whips and rattle of chains don’t worry Jamie Dornan. Angry fans do.

“I almost don’t want to put this out there into the ether, but I fear I’ll get murdered, like John Lennon, by one of those mad fans at the premiere,” the “Fifty Shades of Grey” actor said in Details magazine’s February issue. “Because a lot of people are very angry that I’m playing this character. And I’m a father now, and a husband. I don’t want to die yet.”

See photos: 15 Times the ‘Fifty Shades of Grey’ Trailer Made You Shift in Your Seat

Dornan stepped into the role of S&M-loving billionaire Christian Grey in highly anticipated film after it was vacated by Charlie Hunnam. The “Sons of Anarchy” star dropped out in 2013 citing family issues, as TheWrap previously reported. Not all fans were receptive of Dornan’s casting. Some called for “White Collar” star Matt Bomer to take Hunnam’s place.

Also read: Jamie Dornan Tucked His Junk ‘Like a Little Bag of Grapes’ for ‘Fifty Shades of Grey’

But despite the criticism, Dornan found some humor in the idea of a dramatic end.

“And when I do get murdered,” he said, “people will say, ‘God, isn’t it haunting how he did that interview in Details magazine and predicted his own death on the red carpet?'”

16 Actor Replacements That Worked - Can 'Fifty Shades' Pull it Off Too? (Photos)

These last-minute switches worked out for the best — will the same be true for Charlie Hunnam’s replacement in ‘Fifty Shades of Grey?’

Now that Charlie Hunnam has vacated the role of Christian Grey in "Fifty Shades of Grey," the question is: Can Universal/Focus Features make lemonade? It's been done dozens of times before -- and we have the examples to prove it.
View In Gallery